The play is an ode to the beauty and complexity of life, conveyed in complex and beautiful language.

Citysong only really evokes the notion of “city” at the beginning and at the very end of the show. True, there is a huge, mesmerising map of a city, made entirely of fragments of a mirror, serving as a backdrop. It looms over every scene, and reflects every action as much as a city reflects the intricacy of life. Indeed, any city is a mirror of its people. And yet what seems to be missing in the show is a strong connection to a sense of place, a clear sense of where things are happening, and why it matters. For a show called “Citysong”, there seemed to be not quite enough “city” in it.

The city in question is Dublin and the show, which is written by Dublin-based playwright Dylan Coburn Gray, premiered at the Abbey Theatre Dublin, before transferring to Soho Theatre. Borrowing simultaneously from Dubliners and Mrs Dalloway, the play tells the story of three generations of a family, over the span of one day, but not necessarily in chronological order (“Time does not come back, but it comes again”). There are students, pregnant women, taxi drivers, fathers, Filipinos, clubbers, doctors, young couples. There is enormous richness and variety, and a whole plethora of characters. While the timeframe is just one day, we are presented with a kaleidoscopic infinity of episodes, which at times results in losing track of what’s exactly happening. 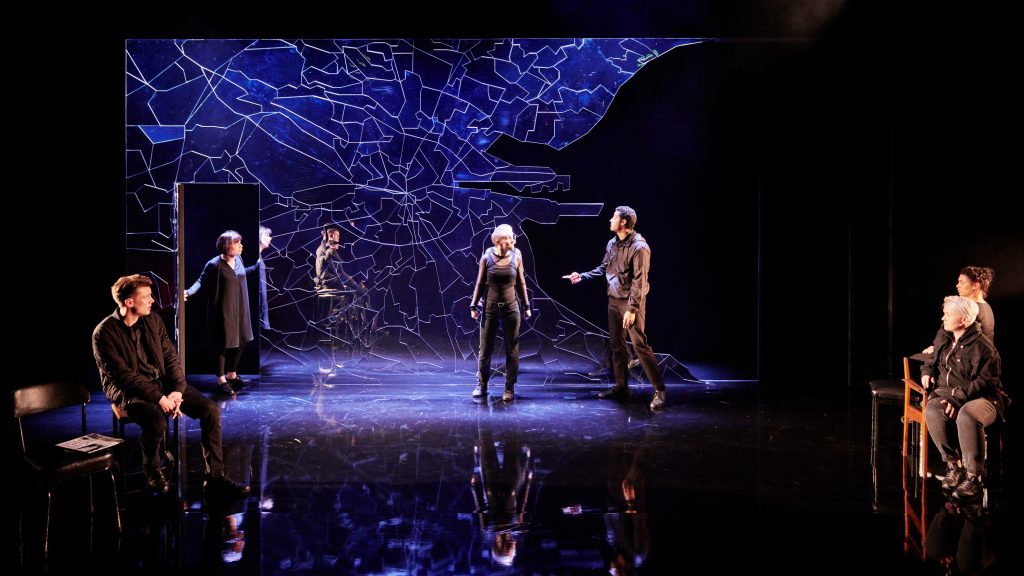 The plot seemed to revolve mostly about the sexual education of younger generations (“sex is like the best hug”), though there are also some touching moments, and some genuinely funny scenes. There’s also a hint of the despondency of Sally Rooney’s Normal People, which includes a (brilliant) sequence in a night club.

Coburn Gray’s script is uncompromisingly poetic, and stays with you as the work of a genius. Adjectives and verbs, sounds and rhymes, metaphors and repetitions are blended to perfection, like a well-orchestrated symphony. The play is an ode to the beauty and complexity of life, conveyed in complex and beautiful language. There is a clear contrast between the lines of the chorus-like narrators, who frame and comment on the storyline, and the quick, sharp remarks of the main characters, punctuated with all the “like”, “though”, and “there” the Dublin slang can produce.

Citysong is pleasurable to watch (and to get lost in), primarily for its impressive and refreshing writing. If you need a poetical theatre fix, you’ve got until July 6th.

Citysong runs at Soho Theatre until July 6th, with shows at 2.30pm and 7.25pm. Tickets are available here.