An intense and captivating one-woman show about girlhood, race and growing up in the Bronx.

As you enter a small, draped, cube of studio space at the Young Vic a long, lithe black woman is jigging and shaking in the corner in a kind of tortured twerk. There is something ritualistic and tribal about the movement in her backless jersey dress as though she is summoning all her ancestors in an attempt to embody the “long line of black women” that have gone before. But there is also something essentially urban about the movement, too, which is enhanced when an unexpected beat suddenly breaks the hypnotic repetitive electronic soundtrack and we hear snippets of street chatter. 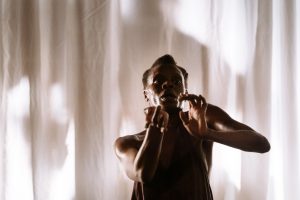 As captivating as her rippling movement is, we become desperate for her to get out of the corner, for her to turn and face us and take the stage. And when she finally does, a full half hour after she first began to move, (there is a 15-minute preset), her face is shiny with sweat and she looks superhuman. This is Okwui Okpokwasili, a Brooklyn-based writer, performer and choreographer who first created this cross-disciplinary one-woman show back in 2012 and was specifically invited by the Young Vic’s artistic director Kwame Kwei-Armah to resurrect it for British audiences.

Finally we hear her speak. Picking up folded pieces of paper from a floor strewn with fallen pot plants and domestic lamps, she reads us an exchange between a pre-pubescent girl and her pubescent friend. The first exchange about sex and orgasm is funny and the audience are in need of a laugh after watching the intense movement for so long. At first it seems as though these might be genuine keepsakes from childhood, but soon the elegance and poeticness of the writing makes in implausible that these are actual teenage missives. Instead we get carried into a story that teeters on the edge of dreams and details an acerbic teenage relationship between two girls coming to terms with their sexuality and womanhood while growing up in the Bronx.

In true Gothic style there is blood at the end of the story. Not leaking onto the stage, but dripping from the increasingly poetic language and, like Mary Shelly, Okpokwasili conjures up a monster with which she has to wrestle.

The text is at times intense and impenetrable and the 80-minute show demands focus and attention from the audience. But Okpokwasili’s performance is captivating. She is entirely vulnerable before us, offering us the whole of herself. You feel that by the time she takes her very curtailed curtain call she is completely spent.

The show is directed by Okpokwasili’s husband Peter Born, who is also the show’s visual and sound designer.

Bronx Gothic runs at the Young Vic until 29 June. youngvic.org/whats-on/bronx-gothic