Despite the promising modern premise and an impressive cast this is a disappointing re-imagination of a great play. The dialogue is clunky and uncomfortable and the production falls short in both humour and credibility.

Re-imagining Moliere’s 17th Century work to 21st Century Highgate is an idea that has great promise. That a wealthy industrialist or City fat cat could be entranced and duped by a shaman is credible. Finding someone who gives the hope finding truth and reason in an unfair and disordered world, while helping a family to come to terms with their underserved riches strikes right at the heart of the ever-growing division between the haves and the have-nots. Further, those responsible can abrogate responsibility for putting things right. It is disappointing then to report that writer John Donelly’s re-working of a great play fails so miserably. 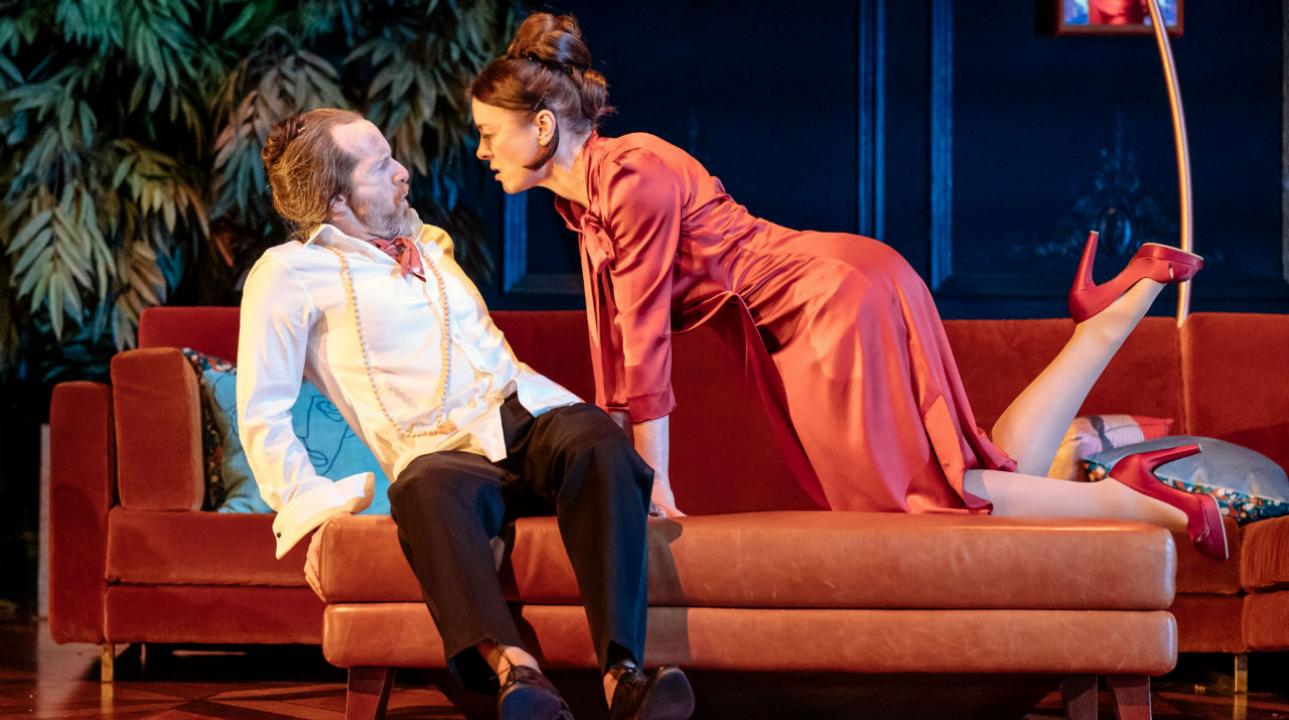 Orgon (Kevin Doyle) has taken Tartuffe (Denis O’Hare) into his house and allowed him to dictate the future direction for his family. Orgon’s mother, Pernelle (Susan Engel), has also fallen under Tartuffe’s spell, but his children see him for what he is – a fraud seeking financial and sexual gratification – and matters come to a head when Orgon insists that his daughter marry Tartuffe, rather than her poet lover Valere. A move that provokes reactions that force Orgon to disown both of his children. Orgon’s wife Elmire (Olivia Williams) similarly sees through Tartuffe and resolves to stage a trap where Orgon can witness the true nature of his supposed guru.

All of this should set the scene for great farcical comedy and a timeless biting commentary on the ascendancy of the moneyed classes. It starts well with a bacchanalian party resulting in Valere falling out of a window and making his escape naked (his modesty covered by a hat) across the front of the audience. From this point, however, the play suffers from a lack of credibility.

The dialogue is stilted and the humour clunky, particularly in its attempts to capture topical themes. The farcical situations, which usually work so well in this play, seem contrived and result in a top quality cast having to try too hard to extract comedic value. There are some high points, notably Elmire’s’s attempt to honey- trap Tartuffe, and Valere’s performance poetry, but they are relatively few.

What of Tartuffe himself? There is no doubting O’Hare’s ability as a versatile comic actor but, while he just about gets away with a mangled east European accent, the garbled collage of spiritual references does him no service, making it hard to believe that anyone could regard him as a bona fide guru. Having started well by wooing the audience with daffodils, by the end his appeal for compassion fell not on deaf, but disinterested ears. In short, this version of Tartuffe just does not work.

The denouement, involving a swat team and a descent into rhyming couplets, is a mess that scrambles to shoehorn the play’s social message into a chaos that is nowhere near as funny as it could, or should, be. The subtitle is “The Imposter” and this is appropriate – but for the wrong reasons.