A beautiful script at an unforgiving pace.

‘… it is not the fear of doing but of suffering wrong that calls forth the reproaches of those who revile injustice.’ – Republic, Plato

Watching Stephen Adly Guirgis’ Jesus Hopped the ‘A’ Train is something like seeing a modern, dramatised version of a Socratic dialogue. In other hands, a heavily segmented script of musings on the subject of justice, ethics, and religion in modern society could quickly turn into a dry and confusing mess, but Kate Hewitt’s sharp direction easily navigates the intricacies of a philosophically heavy script without losing the nuance of Guirgis’ writing. 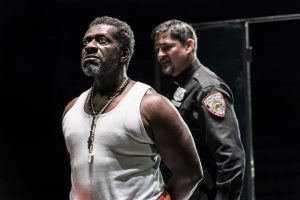 And where does Guirgis choose to set this wrestling match – why, deep within the American judicial system, where else? Here we meet two men committed for murder, their guard, and a lawyer – all with wildly different experiences of justice, and who have formed their own ideas of morality. I would divulge more of the plot, but in the case of ‘Jesus Hopped the ‘A’ Train’, it feels almost incidental to the underlying philosophical discussion. Suffice it to say, the cast give studied and compelling performances that substantiate each of the context-driven arguments presented.

Magda Willi’s set design, a stark line drawn through the centre of an audience otherwise in the round, is a powerful affectation underpinning a plethora of false dichotomies. Good or bad, just or unjust, right or wrong; the characters’ opinions are either directly at odds with each other, or being proselytised to the audience. It’s a dynamic, smart, and visually very poignant answer to the turbulent material. 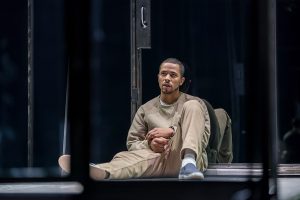 In some ways, the question of society and religion’s relationship with justice and morality has evolved very little over the past 2400 years. It is a grey and frustrating topic, certainly, and anyone going into ‘Jesus Hopped the ‘A’ Train’ seeking to leave fulfilled and with a clear-headed understanding of the subject matter, or even a glance at Guirgis’ own views on the subject, would be naive to do so. Socrates’ own views on the subject are hazy at best, and when discussing morality he certainly left more questions than answers.  The wonderful thing both Socrates and Guirgis have in common, however, is that they are not searching for answers – they are searching for truth. What Guirgis has managed to add to the discourse is a set of equally compelling opinions, all highly believable thanks to the beautifully constructed characters and context, and all significant within the historical narrative.

Jesus Hopped the ‘A’ Train is at the Young Vic until Saturday 30th March, at 19:30 (with Wednesday and Saturday matinees at 14:30). Tickets are available here