Review of: Outlying Islands at the King's Head Theatre

David Greig’s Outlying Islands is a play that comes with a brilliantly meaty concept at its heart. The two-act, five-character piece is based on a real-life story of a pre-WW2 British government, who developed new chemical weapons by bombing remote Scottish islands (as part of the slightly deceptively titled Operation Vegetarian). The weapons, if used, would have decimated Germany’s agricultural heart and probably murdered millions of people. They were quietly retired after 1945.

But Greig’s play just uses this as a backdrop. Instead, we follow two budding ornithologists who come to the island ahead of the test bombings to catalogue the bird colonies. They’re young, bullish, banter-ful and both infatuated with the island-owners’ niece Ellen. And lo, a love triangle emerges.

Greig’s play bagged a Fringe First Award back in 2002 (remember 2002?) when it opened at the Traverse Theatre. But it wasn’t heralded as a modern classic – Lyn Gardner said it “is such a brave play, one that tries so hard to fly, that you are prepared to forgive it when it plummets straight to the ground.” Thump. Even the 2014 revival was met with slightly cautious optimism.

But how does it fare in the hands of director Jessica Lazar of Atticist theatre company, following on from the magical success of her reimagined version of Berkoff’s East in 2018? 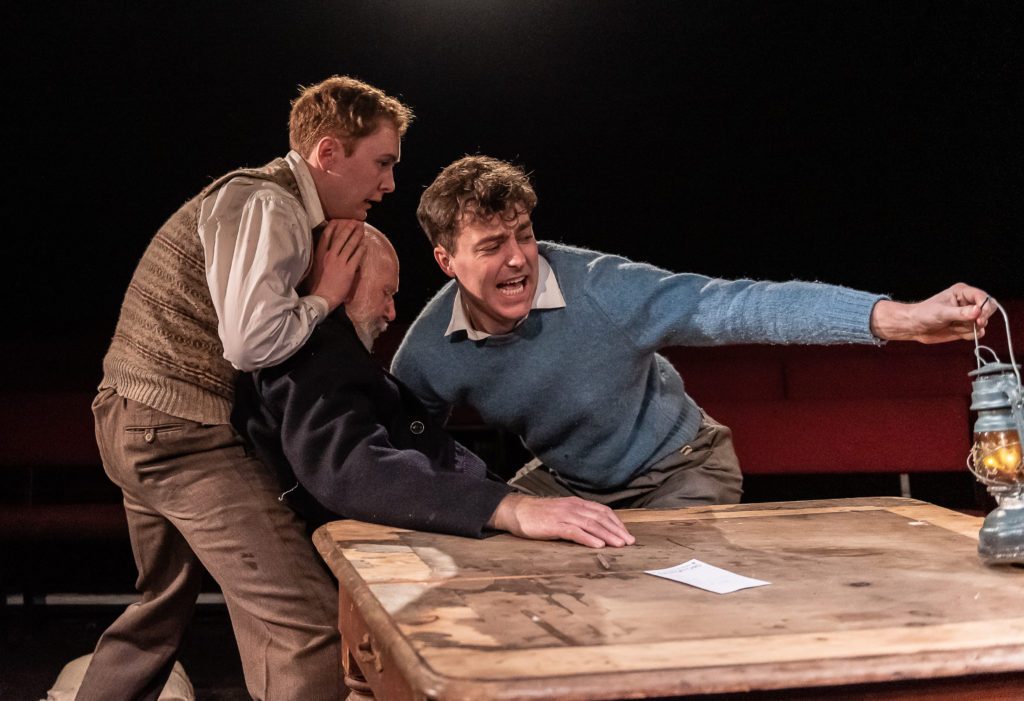 Pretty solidly, it’s worth stating. The cast (barring a few slightly shaky Scottish accents) acquit themselves perfectly well, with Rose Wardlaw’s Ellen shining as a character that could have, with Greig’s writing, amounted to little more than an object of male attraction. Tom Machell, like some sort of Matthew Goode-Rufus Sewell lovechild, is simultaneously haunted and vivacious, at times even animalistic to a point of terrifying. Lazar really knows how to bring out the best in her cast, while plotting the piece’s course with unrelenting energy. Only some iffy lighting decisions feel out of place.

What is fascinating about East and Outlying Islands is that they both bubble with a similar underlying sense of violence. In East, violence is a part of Berkoff’s vision of London – emerging from the mist like a fog. Greig says that this isn’t just a metropolitan phenomenon – violence, just like sexual desire, is an intrinsic part of all of nature – not merely a part of humanity. It is consistent in all things. The island’s birds leave their young for dead, the two graduates wrestle and playfully batter each other and an old man is manhandled and taunted to a point of death. It’s all there – rippling with a tinge of menace. There can be something quite intimidating about having actors close to your face when you exactly what they’re capable of.

It’s a shame then, that Gardner’s point about the play rings true. The text manages to highlight all of these themes, but instead of tying them in a neat bow it all seems to settle on an awkwardly positioned near-threesome with an extra bucket-load of offstage tragedy. The slowly winding tension of the first 135 minutes bleeds away in the final quarter of an hour, almost making you crave you could spend longer out in remote Scotland.

You also get the nagging feeling that Greig misses a trick by focussing so squarely on his own fictitious creations rather than the real circumstances of the island. The British government bombed one of its own islands with anthrax. There were very real plans to do the same to Germany – I remember sitting on my bus back from Angel just awestruck by the true story. Barbarity and modernity are not antithetical. They coexist like two chicks in a nest. Either way I’m excited for Lazar’s next show.