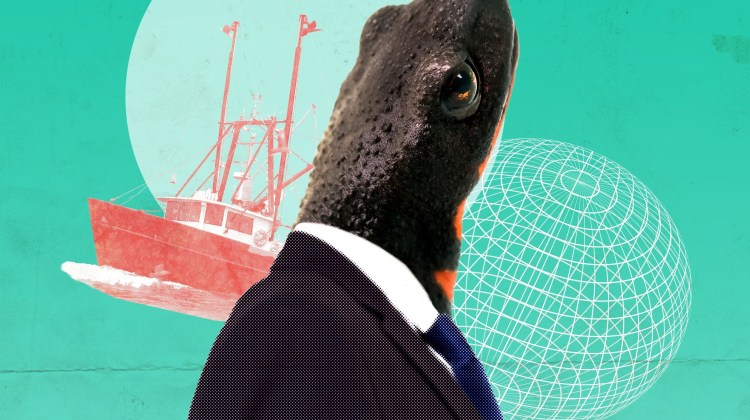 War With The Newts is a curious and complex narrative explored in an immersive theatrical experience. Based on a novel written in the 1930s by Karel Čapek, and adapted by  director Tyrrell Jones and the company of Knaïve Theatre, it is a story uncomfortably contemporaneous in its concerns, exploring otherness, economy and environment and rich mix of scenes.

My first question is about your directing process: how has it evolved?

I guess I sit in a middle space between a theatre director and a devising director, because often my process is about creating the work as well. One of the things that I would say is definitely key is the spirit of collaboration. Although I do believe that a director has a really important role to play in being the outside eye I also think it’s incredibly important to make work collaboratively, to structure a process for other people to participate within rather than telling people what to do. A director that I really admire, Phelim McDermott who works with Improbable, talks about a director’s job being almost like that of a detective, to find the show within the people in the room. Everyone brings a bit of the show with them and the director’s role is to bring those out. For this show we have a group of actors who are really creative, insightful and intelligent human beings as well as being brilliant actors and they were able to contribute hugely to the material. We are also working with a composer [Rob Bentall] and a designer [Hannah Sibai] who were very much part of the creative process and who contributed to and created so many of the key moments in  our production of War With The Newts.

Do you tend to work with a particular style or theatrical form?

Sam [Redway] and I have had many discussions over the years about form, and how we want to work as a company, and I think we’ve come to the conclusion that we’re not that interested in working with a specific style of theatre. What we’re interested in is the content, and our identity as a company is rooted in what kind of content we explore, exploring cognitive dissonance and political dissonance, making people feel uncomfortable, making them question what they thought they knew and making them want to have a discussion about it afterwards. In the last fifty years or so I think there’s been a growing obsession with form rather than with ideas. There is a focus on whether this is a company that makes naturalistic work, or absurdist work, or immersive work and so on, rather than focusing on what the company or artist actually has to say. I think looking at what is actually being said rather than the form or the style is much more interesting. We start with the content, and then look to fit the form to this content, to create a specific audience experience.

Where do you look for content, is it just something that strikes you or do you feel as a company or as a director obliged to explore certain issues?

Čapek’s book just struck us as cutting to the heart of something which was happening, making connections with migration and otherness and labour which wasn’t really being talked about. We’d had Brexit, where a lot of people felt displaced, and angry, and that was being expressed in what seemed to be quite a racist way, broadly speaking, albeit with people I think quite genuinely feeling concerned that their children were going to have less jobs or opportunities. So this connection between otherness, and racism, and what people are paid for labour felt like a really interesting thing to explore. Simultaneously we are dealing with the growing concerns around Artificial Intelligence, and people losing jobs to machines, and it felt like the novel was exploring these things but in the 1930s, which is spooky considering the contemporary relevance of these issues and ideas. We were looking for something that could talk to all of these current preoccupations and anxieties, but with room for different perspectives to interact. For instance, when we were in Leeds we had a huge contingent of white working class women from prisons come and see the show, and they obviously felt like certain sections about labour concerns really spoke to them. In particular during the section where Sam speaks about the amphibinisation of Europe they were really vocally and physically engaged, because this seemed to chime with their own experiences or their own perspective. So for them they were seeing this as a story of the people being done over because of the newts. I hope, at the end, they saw the other side of the exploitation narrative, but the difference in audience perspective is a really important part of the show: a middle class liberal would experience the show very differently, and audiences of different racial backgrounds also have very specific experiences with certain aspects of the show. Everyone looks around and realises that they’re having different reactions to each other; you can see the penny dropping with some people, and not with others, you can track audiences members going through this journey. We wanted to find something that really gave people that experience of strangeness, and that spoke to lots of different perspectives simultaneously whilst examining current anxieties and the role of different historical, political and social narratives in creating these anxieties.

How did you go about developing the show in practical terms, from looking at the novel to having this show on at The Bunker?

It was an interesting and quite convoluted process! We started about 18 months ago, looking at the different sections of the novel and reading chapters as a company before creating improvisations or scenes in a very playful and free way. Some things turned our really well, some things were awful, and we worked in this process for quite a long time going backwards and forwards between the novel and improvised work. It was difficult to work to Čapek’s tone though, and he’s working with so many inflammatory ideas, for instance surrounding race, that it became a fraught process of treading a thin line. I think we’ve managed to get the balance exactly right, but some of the ideas we were playing with early on we realised had to go. It was a difficult tightrope to tread between exploring the issues and going too far, and eventually we came up with the archive concept and having three video narrators as a narrative device to help frame and structure the piece.

How did you find the process of scripting this production?

The script was tough to write because the novel is so weird, so surreal and strange. It’s in three parts, the first part is a first person, semi-colonial adventure story which is quite serious in tone although there are funny moments. Then suddenly there’s this huge chunk of the novel, book two, which is the biggest book, which is a collection of fake newspaper articles, scientific journals, scraps of people’s diaries – it’s in so many different forms, it was really challenging to think of how to adapt this for the stage. Then the third book feels really heightened and absurd because it has got to a point where things are so bad that it’s kind of hilarious. It’s a really, really weird novel in that sense, and part of its weirdness is it’s beauty but how do you do justice to that in theatre, where most of the time people want to be able to classify things as comedy, or serious, or political. We decided it had to be all those things,  which led to the different styles of scenes. The dissection scene, for example, is in homage to the entire middle section of science journals and articles. That’s also where the idea of the archive came from because the book itself felt like an archive, like someone had collected a whole load of sources and put them in one place in a scrapbook. In fact that is supposedly what has happened, but articles and sources have been lost along the way so it is an incomplete picture, giving a specific and unreliable view of the history and the narrative. How many things in history do we not know? This feels very relevant now,  and so we have the three characters of the archive trying to produce quite a specific view of the history that we start to learn is not the whole story.

In the show we never see the newts as characters on stage. Do you think this enables the audience to other them more effectively?

I think so – it’s easiest to believe things that are frightening about people if you never see them, and I suppose we wanted the audience to swallow the pill as much as possible, to believe that the newts might be something terrible, or even just that they’re something worthless or not that important. Then we can ask the questions of if I can believe this, without really questioning it or engaging with the thing itself, what else do I believe unquestioningly on a daily basis? Ideally we wanted to confront an audience with its own prejudice, and to encourage them to question what they are given by an authority figure. The audience is able to create their own image of what the newts are, and then as the story progresses that image is constantly changed or messed with. Every scene should be an experience of having to re-assess, which should be parallel to experiences of people actually learning about something which is  or which seems other from them.

What do you hope people come away from your show with?

I hope people leave feeling like they have something they need to think about, and probably something slightly or very uncomfortable at that. I hope most people go away from the show thinking about how they understand the way that information is given to them, what they trust and what narratives they accept. All of us have the potential to have casual prejudices, conveniences, which we need to interrogate. People are used to sitting in their bubbles and I think theatre is a great opportunity to take people outside of that bubble, and to look at the world from a different perspective. One of the things we really strive to do is to create something where not everyone is going to agree, and some people are going to be made deeply uncomfortable by some of the things in there.