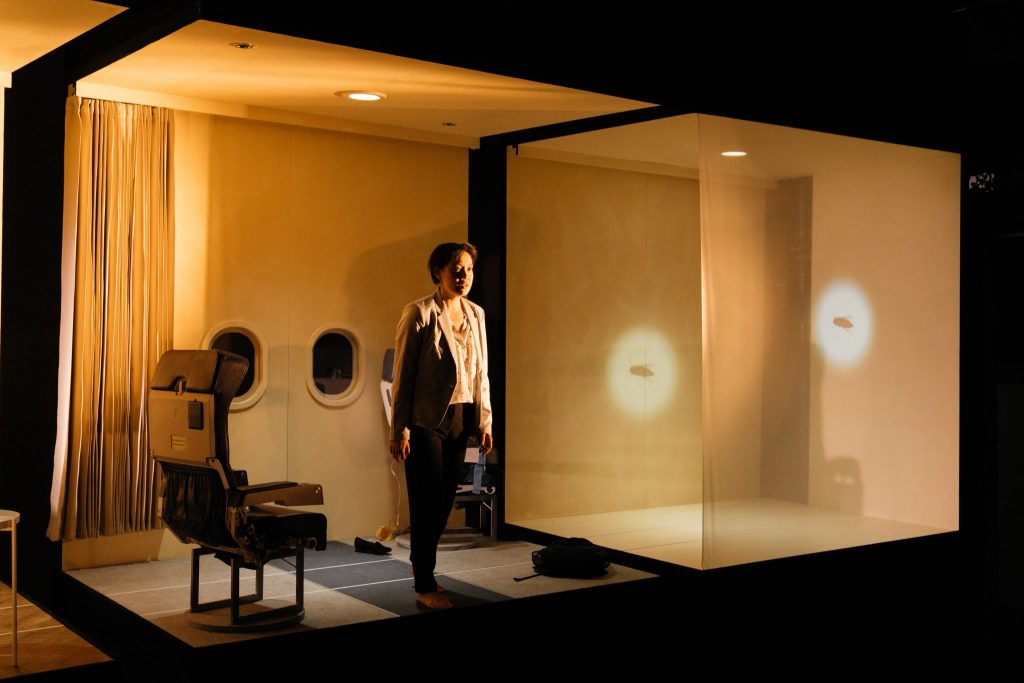 Theatre is an evolving beast.

Theatre criticism, perhaps, languishes, clinging to frameworks and the memory of a bygone era of print in a way that can inhibit a write up, or not give a critic a chance to articulate what they feel about a show. Instead it’s usually a series of box ticks and buzzwords that a show has to conform to. Insert star rating here.

It makes the critical reaction to A Kettle of Fish at the Yard particularly intriguing. The Stage said there was “a pleasing boldness” but that “none of the elements really gel”. Time Out branded it “frustrating stuff“. The Guardian felt that “our confusion and bemusement feels the fault of the production rather than the culture“.

I don’t think I agree with a lot of that, but I do think I can see where it’s coming from.

What is striking for me is that Lisa, the protagonist of Brad Birch’s new play,  is an instinctive critic. As the text shows, she constantly critiques others, herself, her behaviour and her surroundings.  Set almost exclusively on a high pressurised plane, she is self-conscious to a point of having to examine a fly buzzing in front of her just to cope with her circumstances. As she receives word, while locked in a cabin, that her house is on fire and her father’s in peril, she still judges her own reaction, terrified that she isn’t performing the right way.

If Birch’s play is all about a reflexively critical woman unable to articulate her own feelings, and for 70 minutes she’s scrutinised by a load of pen-scribbling journos thinking about their 250-to-400-word writeup, the process doesn’t feel suitable. Critics are reviewing a critic who is perpetually critiquing their own performance.

Lots of things don’t, in a conventional, critical dissection of the play, work in A Kettle of Fish. As many critics have pointed out. The set feels two dimensional,  Birch’s script is lacking in some pivotal character development early on, and Caitlin McLeod’s production, replete with headphones for every audience member, has a knack for feeling distant, almost ill-fitting in the Yard’s space. Some of these complaints I can get on board with. These are all things a critic, in their conventional framework, would trot out and level. An easy way to hit the words.

But by the same token, I think there’s more going on here. Writing this particular review, for me, is a novelty. Normally I’m the one obsessed with star ratings and getting to the required amount, but in the case of A Kettle of Fish,  and a lot of plays recently, that feels unsuitable.

Lisa is, by her nature, standoffish, ill-equipped at telling a story, so self-conscious that any performance is also an act of self-scrutiny. And so it should be – the paranoia and terror of being trapped on a plane during a traumatic experience would be garish, horrible and discombobulating. Allowing that sensation to define not just a character but also an entire production, with some queasy, intense close-ups projected onto a gauze, is a bold decision by McLeod. And it works. It works in a way theatre doesn’t conventionally work. The headphones are a part of this – Kweh’s voice is quite literally cast out of her body and thrust into our ears. It exists in isolation.

It, in my eyes, instantly transforms the show. The idea that this is a performance suddenly became overwhelmingly pressing. Kweh is tearing apart her surroundings, scrutinizing the cracks in her stage. Quite literally sticking her head in the sand.

Things fall apart beneath her. Her plane becomes a platform suspended over a concrete floor. A few score people are sat watching her. She’s afraid. She begins to crawl across the floor. Performance is now arduous.

Is that enough for a write-up? Am I doing exactly what Lisa does by analysing my own reaction? It’s a show that’s going to stick with me, and it does, in a way only the Yard really manages to achieve, come across as disconcertingly unsettling. It works by not really working. Because when does anything in life really work? Isn’t it all just a bit of a terrifying mess?