Review of: A Funny Thing Happened on the Way to the Gynecologic Oncology Unit at Memorial Sloan Kettering Cancer Centre of New York City

The title is exactly the right mix of absurd, but truthful. Unfortunately the rest of the play just misses the mark.

When you walk into a theatre dressed up as a hospital room, it should immediately feel foreign and uncomfortable. We all hope there will be relatively few reasons to visit a hospital in one’s lifetime, but when forced to recall, too many of us (myself included), can immediately remember leaning awkwardly, worriedly, over the bed of a relative/partner/family friend/friend, who is battling cancer. Standing there, you feel unsettled and out of place – a perfectly healthy person, completely unqualified to be of any use, but who feels obliged to be there for the loved one who does not have the choice to leave. It’s awful, it’s sad, and it’s tense. And this is the tension that is sadly lacking in A Funny Thing Happened on the Way to the Gynecologic Oncology Unit at Memorial Sloan Kettering Cancer Centre of New York City.

The play is an episodic account of two strangers brought together, meet-cute-style, by the shared tragedy of having their mothers, both occupying the same hospital room, suffering ovarian cancer. Our strangers are struggling comedienne, Kara (Cariad Lloyd), and disheveled millionaire IT guru, Don (Rob Crouch). While unlikely, the setting does manage to eke out a few sincere moments between the mother and daughter pairing of Marcie and Kara (Kristin Milward and Cariad Lloyd respectively), and there are some genuinely amusing lines and scenes dotted throughout, delivered mainly by Marcie and Don, in response to the ‘bit’s being workshopped by Kara. However, although it has clearly been written with the intention of creating a black comedy dealing with the heavy topics of cancer and strained familial relationships, it plays a bit too much like a sitcom to come across as genuine. 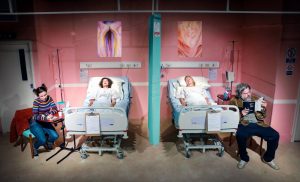 To the credit of the actors and director, it seems like something in the script was lost in translation on its way across the Pond rather than an inability to be able to translate the work themselves. You can see where American writer Halley Feiffer has tried to toe the line between sincerity and comedy, but the piece never gives itself the opportunity to create the tension needed for the relief of the punch lines to hit with any gusto. When you couple that with the fact that packing the comedic punches with mentions of rape comes off more offensive than edgy, it does leave you feeling that a genuinely dark situation has not been made sufficiently lighter by the addition of the jokes.

Despite the limited space, there certainly some nice dynamics and a smart use of the stage and set by director Bethany Pitts, and she does create some entertaining moments, but not enough. All in all, the attempts to toe that line between authentic and absurd end up coming off with varying amounts of success. The walls of the hospital room being adorned by Georgia O-Keefe-style paintings of flowers-come-female-sex-organs? Success. Telling the audience ‘there’s nothing as funny as a rape joke’ – less so.

A Funny Thing Happened on the Way to the Gynecologic Oncology Unit at Memorial Sloan Kettering Cancer Centre of New York City is at the Finborough Theatre until Saturday 27th October, at 19:30 (with some Saturday and Sunday matinees at 15:00). Tickets are available here