This enchanting theatricalisation of Julia Donaldson’s picture book The Everywhere Bear is a great success, with captivating puppetry and joyful songs.

The Polka Theatre have pulled it off again with this charming show for the under-6s. Running at just under an hour it had its small audience entirely enthralled on the afternoon I saw it, with critics ranging from toddlers to discerning young school goers. 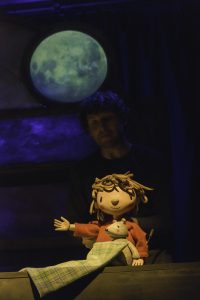 The story follows the journey of a stuffed bear – played with great pathos by a beautifully carved wooden puppet – when he goes home from school with the new boy in the class Matt (another endearing puppet from the hands of Jan Zalud). When Matt gets distracted by a cat, the bear gets accidentally dropped and his adventures take him from puddle, to drain, to ship, to shop, to skip, to the beak of a bird and back to the arms of Class 1.

Using much of the original language of Donaldson’s book, with some imaginative new text, the show is almost entirely sung by the two performer/puppeteers; Amy Tweed and Daniel Harlock.

A clever set from designer Laura McEwan sees the small stage transformed from classroom, to library, to ship to fishmongers at just the turn of hinge and the flick of a projection. Some of the images are Rebecca Cobbs original illustrations from the book; others are compelling sequences of shadow puppetry or atmospheric projections of rain or moon.

There are many delightful moments in the show. The young audience particularly delighted in the grunts and groans when Tweed and Harlock play builders painting a yellow line in the road and in Harlock’s pantomime damesque Mrs Bishop who runs a fish shop.

Straying a little from the book, the show adds a lesson in recycling and waste while the Everywhere Bear sits forlornly on a skip, telling us that nothing is ever truly lost and the things that humans create must end up somewhere. The wooden seagull puppet gets a bit of plastic caught on its neck in a warning against littering.

I loved every minute of this show and would watch it again in a flash. It is everything that children’s theatre should be: magical, engaging, emotionally charged and informative. A wonderful piece of storytelling.

This show is running at the Polka Theatre until 26 August. It will then run at the Little Angel Theatre from Thurs 13 September – Sun 11 November. Polkatheatre.com littleangeltheatre.com