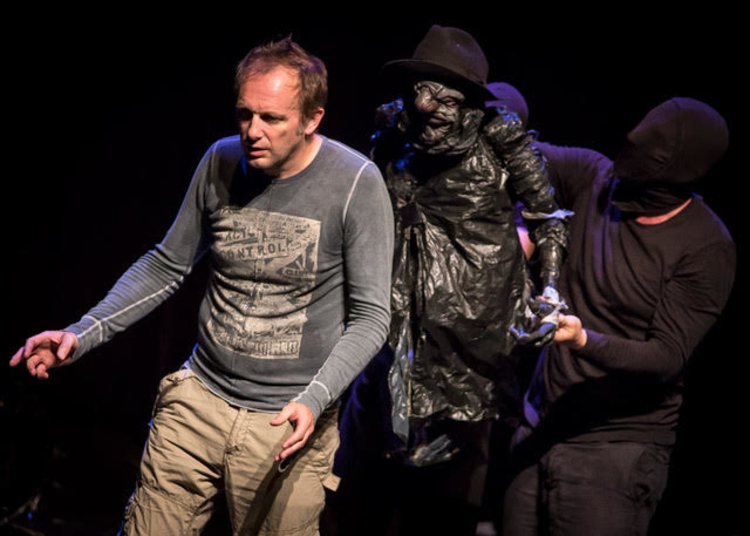 Two-times Fringe First winners Blind Summit (The Table, Citizen Puppet) are back at the Pleasance this year with Henry. Renowned for his bunraku-inspired ‘Extreme Puppetry’ style, this time Artistic Director Mark Down is turning his attention towards the person behind the puppet.

How’s Edinburgh going for you so far?

I got here yesterday, and wore long trousers for the first time in three months. I’ve just spent the day rewriting the second half of the script and we’re teching tonight. I haven’t seen a show yet!

Can you summarise Henry in 3 words?

When did you first start working on Henry?

The tramp puppet was first made by Nick Barnes 30 years ago, and we staged a one man show with it in 2002, set on top of a shopping trolley. I picked the puppet up again last summer at a residency in Il Finaro Centro Cultural, and have rewritten the original story completely. It’s now about being a puppet director, a middle aged white male and a control freak. It’s not autobiographical! The hope is that it explores universal themes like the father/son relationship through an extreme situation.

How has the show developed and grown since its premiere in Il Funaro earlier this year?

My hope is that it’s grown – I’m not certain yet! In the original show the puppet and puppeteer both talked in two interlocked monologues. In Il Finaro we changed this, so the first 20 minutes was the puppeteer’s long intro to the show, and the 2nd half was the puppet talking. What came out of the performances in Il Finaro was that we didn’t actually like the puppet talking, or the competition between the parts, so we developed the first 20 minutes into the whole show, and the puppet has become a ghost character. It’s still the driving force of the show but it doesn’t speak. Now, the puppeteer is running a masterclass, with two students played by masked puppeteers. If you’ve seen Blind Summit’s The Table, then Henry is its other half – whereas The Table focused on the life of the puppet, this is the life of the puppeteer. The idea of examining the puppeteer has been with me at Blind Summit for a long time – I feel like an expert on puppeteers but I’ve never done a show about one.

What do you want your audience to feel when they see Henry?

I want them to be compelled, find it funny, and be moved. All the usual stuff! There’s a lot of white, male, middle class people doing monologues about their parents, and Henry comments on that, or rather questions it. There’s also an anti-social and control-freak side to directing, particularly in visual theatre. There are certain qualities that puppet directors often share, probably because it’s difficult to verbalise our work in rehearsals. So you develop a certain tone of voice and you can end up furious, in a stressful environment, because what happens on the stage is so uncontrollable. The question this show asks is ‘is it worth it?’ Is the beauty of creating this theatre worth the anti social nature of the work? In that way, Henry is very personal – because if the answer is ‘no’ then I’ve got to find something else to do!

Any unexpected reactions so far?

All reactions are slightly unexpected. The audience’s perspective on whether Henry is autobiographical or not or not is a complicated one. I think it’s very exciting when something appears to be true but isn’t. One of the challenges is that people think the show is very narcissistic, when it’s actually a show about narcissism. I don’t mind being the bad guy as long as that idea comes across, but pitching it right is a fine balance.

Did you talk to other puppeteers or was it an introspective process?

It’s been counterspectic! I got loads of people in, took lots of advice, and made sure I looked at the central character I’m playing as separate from me. Henry’s not about investigating the facts of my own life, but you do find yourself saying things in rehearsals and thinking ‘woah! That’s a bit close to the truth!’.

Which show are you most looking forward to seeing during the festival?

I want to see How to Be Alone on the Free Fringe, by Fiona Clift who’s a performer in Henry. Mistero Buffo by Rhum and Clay – Julian Spooner is fantastic and was a key influence in helping me shift Henry into its new form. It’s Not A Sprint by NOVAE Theatre Company is also being directed by Ellie, our General Manager. And lastly. I want to see Akram Khan in XENOS and need to book a ticket!

I’ve entered the Edinburgh bubble and can barely think of anything but lighting cues! I want to say how much we love the Pleasance, we really like the venue, and the venue likes us, it’s such a great relationship to have.