This June, award-winning writer Alan Flanagan is bringing his new play Bingo to Pleasance Downstairs. An investigation of STIs and LGBTQ identity, it brings a new meaning to ‘infectious’ humour, telling the story of Cormac and his response to his first STI test. We caught up with Alan amidst rehearsals to find out how the show is going. 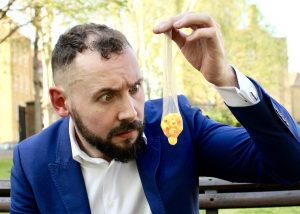 How’s prep going for the show?

Very, very strangely! We’ve had the show squared away for weeks now because I’ve been up the walls with the abortion referendum in Ireland and travelled home for that. Amazing, busy, busy time that slightly overshadowed Bingo. But it’s all in the same sexual health wheelhouse so figure it’s allowed! Apart from that it’s been brilliant fun. Dan Hutton, the director, is extremely talented and extremely hilarious so we’ve just had a great time putting Bingo together.

What inspired you to write the play?

I remember sitting in a clinic one strange afternoon a few years back and experiencing the terror of that weird silence before they tell you your results – your brain just fills in every mad, worst case scenario in those milliseconds, and it popped into my head how awful and hilarious it would be if the doctor turned to me and said, “You have everything”. What inspired me to actually put pen to paper to write the show was about a year later when I arrived at the same clinic, St. Ann’s in Harringay, and the door was locked with just a small poster saying they’d shut down. Then I got angry. And then I started writing.

How have you negotiated putting difficult issues – like STIs – on stage, and keeping them funny?

I think everything’s inherently hilarious, and I think secretly we all do. Probably the Irish in me just makes me more likely to say it out loud. No matter what happens to you in life – no matter how tragic, no matter how serious – there will always be elements of it that are funny. That’s just how life works. When it comes to writing about Difficult-Issues-Capital-D-Capital-I as long as you know you take them seriously, take the characters seriously, then you should feel free to throw in humour constantly. It’s how we look at life. Also it’s STIs so amid all the personal trauma we are dealing with a bag of dicks floating in the wind, which lends itself to comedy fairly easily,

Sometimes I feel like a cheat – I’m a writer by trade so when I hop up on stage I get some severe imposter syndrome. While Bingo and anything else I write is heavily fictionalised there’s always so much of me in my writing that when I perform it, it can feel a little more vulnerable. But the rhythm and cadence of the language suits me because I wrote it, and if I forget my lines I suppose technically anything I say is correct! I think I won’t really know how Bingo will feel until I get the audience in front of me and the full terror/joy sets in.

Firstly, please contact your MP about cuts in sexual health. Honestly. That stuff is being gutted and nobody is paying attention because they think the issue is too icky.

Secondly, a huge shout-out to people like SLAM – our producers – who are pushing new writing. Their work on SLAMinutes is showcasing new snippets of work constantly, and even Bingo originated when Rebecca Jones from SLAM caught a sliver of Bingo at an event run by Stitchin’ Fiction. Basically, get out there and catch these new writing nights because there are so many incredible voices bringing incredibly fresh takes to the world of writing – and if you don’t, we’ll be subjected to another version of Shakespeare. He’s a top lad, William, but he’s one man who’s spent 400 years ensuring new writing gets ignored.