Review of: Effigies of Wickedness at the Gate Theatre

Vibrant, in-your-face, and over-the-top: Effigies of Wickedness explodes with irreverence and freshness, bringing the accomplishment of ENO to the peculiar venue that is the Gate Theatre.

Vibrant, in-your-face, and over-the-top: Effigies of Wickedness explodes with irreverence and freshness, bringing the accomplishment of ENO (which is co-producer) to the peculiar venue that is the Gate Theatre.

The genesis of the show is a set of songs banned by the Third Reich between 1920 and 1939, on the grounds of being immoral, degenerate, impure – or simply composed by Jews, blacks, and “un-Germans”. The list of banned songs, showcased at the time in an exhibition entitled “Entartete Musik”, is almost endless, and in Effigies of Wickedness we are presented with a sample of 14, under the direction of the Gate’s artistic director Ellen McDougall.

Originally in German, the songs have a new musical arrangement by Corin Buckeridge and have been re-lyricised by Seriol Davies – whom some of you might remember from How to Win Against History. His cheeky cleverness is in splendid form, and so is the vivacity of the arrangements by Buckeridge. Presented in a cabaret context (which seems the obvious choice in a space like the Gate Theatre) the music goes above and beyond cabaret, with contaminations from opera, jazz, musicals, and more.

The outcome is a rather fortunate pastiche. We get a mixture of serious and hilarious pieces, from melancholic “Dead” to energetic “Life’s a Swindle”. By the very nature of cabaret, the handling of critical themes is quite casual, at times perhaps a bit incomplete (like “Abortion is Illegal”), while other numbers achieve great profundity even in their sparkling frivolity (like “Münchhausen”). What the audience should really look forward to, though, are the exhilarating change of scenes, where the actors give their best. It is the critic’s duty to comment on a show, not to spoil it, so I won’t be saying anything more. 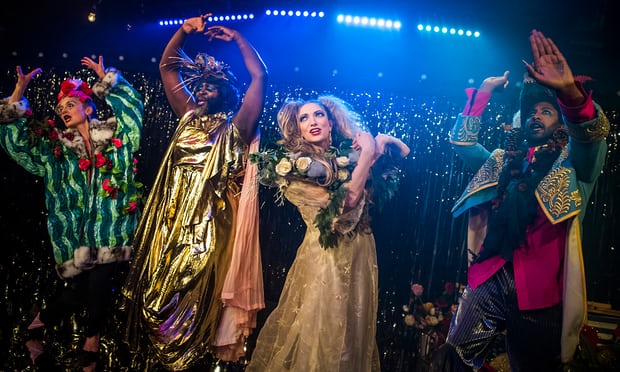 To say that the show celebrates diversity is a huge understatement – it wallows in it. First and foremost, this is evident in the cast. The four singers, which fill the stage as if they were fourteen, take pride in defying any kind stereotype, precisely the kind of thing that would have got the Nazi’s disapproval. Their characters are all very extra, very über, very fabulous.

Further, the performers span across a wide variety of singing styles, from bel canto singers Peter Brathwaite and Katie Bray to cabaret performers Le Gateau Chocolat and Lucy McCormick – genre fluidity is key to this show. The musical accomplishment of all four is quite astonishing, and it is quite simply a pleasure to be exposed to such talented signing.

The quirkiness and colourful nature of the show is reflected in the design by Ellan Parry, which initially reminds one of an fresher’s room, but eventually, amidst the chaos of the show, it just turns out to be the perfect setting. It feeds into the atmosphere of excess and extravagance that constitutes the core of this show. The design stays true to the lyrics of the opening tune “The Lavender Song”, ‘we live in colours they [the Nazi] don’t even see’.

The night is one to remember. Colours, exuberance, great music – Effigies of Wickedness has all it takes to be a great cabaret and to provoke some thoughts on what it means to be different and to be free, empowering not to be afraid to be either.

Effigies of Wickedness plays at the Gate Theatre until 9th June.