A sadly uninspiring opening to this year's CircusFest

One of the greatest feats in any grand circus show is the ability to create a balance between visual anarchy and skilled, adept individual performance. What can appear as a feast for the senses can, on closer inspection, further reveal decades of talent and honed ability, down to each individual rotation of the wrist or perfectly timed leap onto a trapeze. Both are as important as the other – the skill and spectacle go hand in hand. Organised chaos is a massively difficult thing to pull off.

It’s why Relentless Unstoppable Human Machine, from Pirates of the Carabina, is a frustrating show. Featuring aerial, balance and trapeze work, the circus piece conjures brief moments of flashing brilliance, of individual artists able to display their work in front of a larger audience, all the more significant given the 250 years of circus anniversary that 2018 represents. With the troupe loosely conjuring up an urban metropolis constantly full of whimsy, boozing and levitating pianos, the production attempts to sidle from serenity to frenzy and back again, across a single night.

But stretched out over nearly 140 minutes and within the vastness of Camden’s cavernous Roundhouse, the show feels, sadly, somewhat lost. It all seems to exist less like a visual feast, but more as a sparse buffet presented in an open warehouse.The trapeze work, as well as the wirewalking, were all jolly serenades, but they felt like respites from a slightly more dreary, repetitive experience. For a show aiming to be both relentless and unstoppable, it all came across as a bit more fleeting, unable to truly exert itself. 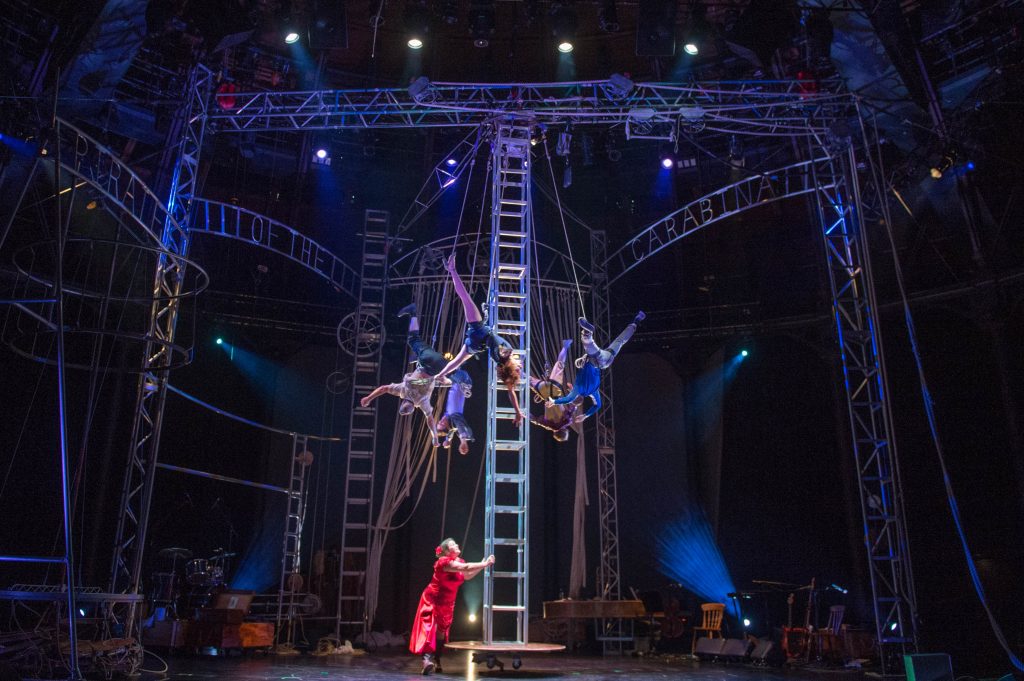 The huge expanse of the venue swallowed up the atmosphere, and in spite of the metallic set, with a smattering of cogs distributed to and fro, the show never really seemed to sit well. It yearned for more intimacy, where the skills of its performers, and the whimsy of its attitude, could be more keenly witnessed. The clowning passages suffered the most from this sense of distance – while able to cover larger changes between different segments, they felt lost among the vastness of the set, the comedy forced and too small for the scale of the show.

Some fantastic musical flourishes, drawing from influences like gipsy jazz and folksy riffs to embellish the stage action were welcome additions, made all the more impressive by the fact that a large number of the circus performers were also talented musicians. It gave the show an earthy, communal, miasmic feel, one that was certainly endearing.

But for the most part, it’s too little going on in for too big an expanse of space and for too long a duration. A company wrought with talent and taboo-busting drive, sure, but RUHM felt like a sad misfire for CircusFest.