A compelling drama surrounding the approach to the D-Day landings. David Haig's performance in his own play is a perfect yet painfully observed study of a man who has the fate of 350,000 troops hanging on the accuracy of his weather forecasts. This is the story of a key moment that determined modern history. It is a story worth telling and is exceptionally well told. 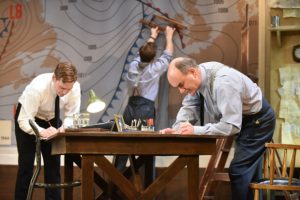 It is June 1944 and, following some 18 months of preparation, the Allied Forces are ready to invade France. All is in place, and the timing regarding tides and a full moon look perfect, but what about the weather? That the fate of 350,000 thousand troops hinge on getting this right is pressure indeed – pressure intensified by US weather expert Irving P. Krick disagreeing with the British meteorologist, James Stagg. Krick’s two-dimensional approach predicts a clear calm day, a scenario that is music to Supreme Commander Eisenhower’s ears, but Stagg sees the weather differently: he foresees an unprecedented storm. If Stagg is right, timing D-Day for 5th June will be an unprecedented disaster.

Pressure creates a scenario of extreme jeopardy based on intellect and ego. Is the American just saying what he knows Eisenhower wants to hear? Or is Stagg digging is heels in, in the face of mounting evidence just to protect his reputation? Within all of this there are additional pressures. Stagg’s wife is about to have their second child and has dangerously high blood pressure, yet secrecy forbids Stagg from contacting her or her doctor. The story also successfully portrays the very close relationship between Eisenhower and his assistant Kay Summersby, a woman who has devoted her life to his service. Writer David Haig has beautifully weaves these subplots into the narrative in such a way that the need to make a final decision on the invasion is emotionally overwhelming.

Director John Dove’s perfectly paced production compliments Haig’s brilliant script, and together they manage to make the receipt of four days of weather reports dramatic and utterly compelling. Pressure is further enhanced by performances that give real insight into the characters. David Haig as Stagg is initially a dour and unsmiling Scot, but later heartbreaking as he balances fighting his case to delay the invasion and dealing with the emotions of his wife going into labour. Laura Rogers shows Summersby as a supportive confident to Eisenhower, but also an essential emotional prop for Stagg at a time of great need. Her portrayal of a devoted woman, destined to by sidelined as the war fades, is full of pathos and tenderness. Playing Eisenhower is a tough ask, but Malcolm Sinclair manages to stop short of pastiche and, helped by Haig’s dialogue, shows a man that empathised with his troops yet did not lose sight of the ultimate goal.

Seeing such a powerful play in the intimate surroundings of the Park Theatre is a rare treat. Pressure deserves to be a huge success. This production runs until 28th April, but a transfer to the West End is already scheduled, with the play opening at the Ambassadors theatre on 6th June.