Review of: Much Ado About Nothing at Rose Theatre, Kingston

Much Ado About Nothing certainly holds itself up as one of Shakespeare’s more reputed comedies – flush with a central pairing of Benedick and Beatrice, allowing star power to tease laughs out of some whip-sharp Bard dialogue. Recent productions have largely been successful (setting aside the Redgrave / Jones combination in 2013), with the Globe’s euphoric Mexican-relocated show presenting a society on the verge of conflict, while Michelle Terry was the perfect Beatrice in the RSC’s Downton-inspired piece. Even Joss Whedon did a solid, slightly sedate film adaptation during the writer’s strike in Hollywood.

But director Simon Dormandy finds a juicy angle in this new production, which comes to Kingston. His programme notes reveal a painstaking comparison with Shakespeare’s sources –  Matteo Bandello of Mantua, or even Edmund Spenser. What Shakespeare actually does in his play, compared to his ‘inspirations’, is heighten the misogyny of his male characters –  Claudio’s shaming of Hero, Leonato’s shaming of his daughter all being ways devised by Shakespeare to ramp up the masculine posturing of the play. 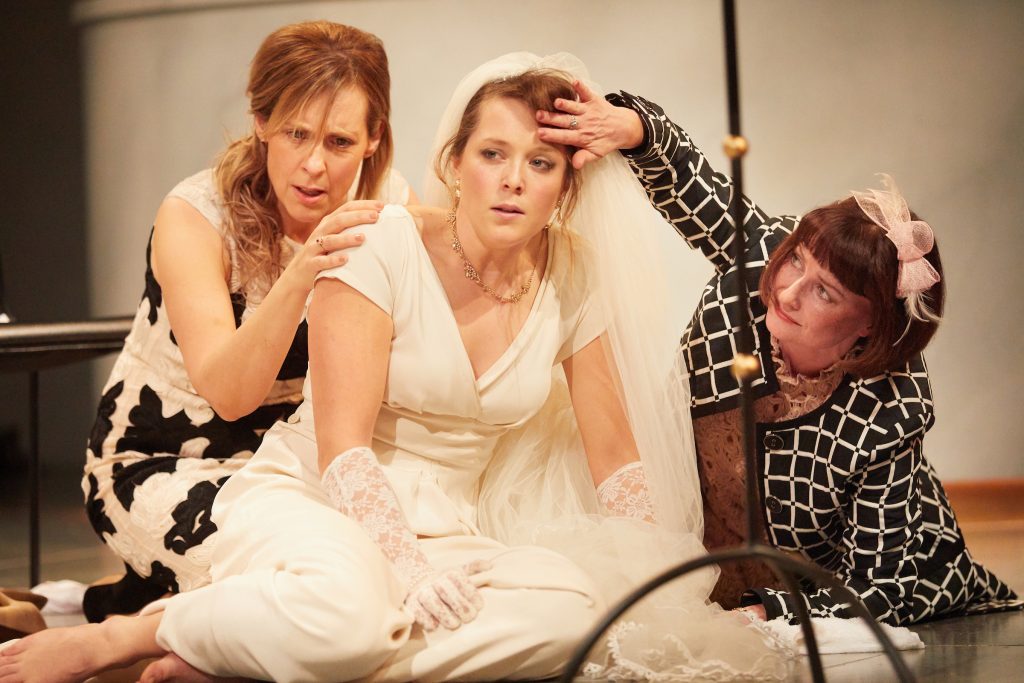 It means that the Rose Theatre’s production, transported to Sicilian Italy, becomes something of a thesis on toxic masculinity. Mafia gang boss Don Pedro (Peter Guinness) returns back to a Hotel Babylon-esque resort, after many months of fighting. There he oversees the pairing of the resort owner (Leonato, David Rintoul)’s daughter and his own man Claudio (Calam Lynch). While the usual comedic fare simmers throughout, it is the emphasis on the place of the male characters that is most striking – the cocking of pistols, the thrusting of knives. At one point Benedick does jumping pushups. As much as we may think Beatrice to be a firebrand of a female role, she is, unfortunately, operating very much within male parameters.

And Mel Giedroyc is an intriguing Beatrice. While certainly laden with gimmicky moments, winking and nudging at the audience like the best Bake Off cutaway, you can sense a frustration to her actions, tied to this resort while the men go off to fight. While she makes for a wonderful pairing with Benedick (a sublime, physically brilliant John Hopkins, who is consistently and hilariously watchable), Dormandy’s production almost makes their coupling secondary to the more tragic, misogyny driven shaming of Hero. The two leads feel like the B-plot in their own show.

The general piece becomes, therefore, a bit upended. As we dwell on Don Pedro’s masked courting of Hero, and the calculating schemes of Peter Bray’s Don John, the meditations on masculinity cloy at the plot, meandering through knife fights and half-baked interrogation scenes while funnier moments (the masked confrontation between Benedick and Beatrice, or even Benedick’s ‘overhearing’ of Pedro and Claudio) are gone too soon, too swiftly. The female characters, especially Kate Lamb’s Hero, are given an unfortunately small amount to do as Dormandy places his emphases elsewhere.

But as Don Pedro leaves, gun in hand, to square off with his escaping brother, you can feel that the director is on to something – Shakespeare really was making some fascinating points about gender. But there’s a whole raft of comedy to go alongside it, and this felt sadly unfulfilled.