Ink Festival 2018 provides a platform for a sweeping range of creative activities in East Anglia, with a local focus and national aspirations. Artistic Director, Julia Sowerbutts and her creative team present a slickly timetabled range of newly commissioned works over the course of a two-day feast of creativity at The Cut in Halesworth, Suffolk. 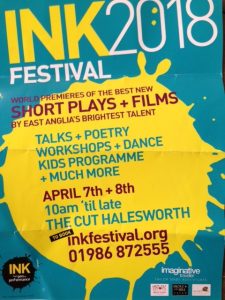 This year the festival has a new original musical theatre piece, Heart of Winter by Tim Connor and Lisa Buddle. Director Susan Raasay keeps the focus on the strong lyrical narrative as it charts the emotional rise and fall of Kate (sung with terrific vocal dexterity by Rebecca Trehearn) who struggles to make sense of a broken relationship. Bold and contemporary, Heart of Winter and their creative team are a real find that will bring colour to your cheeks, if not bring a tear to your eye.

On the main stage The Inkredible 5 (Richard Curtis, Esther Freud, Blake Morrison and Steve Waters) provided a series of short micro plays, some funny, touching or intriguing, but all entertaining. All of these will tour East Anglia after the festival – pioneering stuff to test the demand for an evening of short scenes or one act pieces, but this seems to be the style of INK – do it, but do it differently.

INK is probably also the only festival in the country to provide a space for Radio Theatre, where an opportunity is given to audiences to hear and see a range of radio plays. Short, sometimes pithy but always entertaining and at times fascinating, these include pieces like Her Mother’s Voice (Astrid Ronning), presenting vintage footage with wit and style. Others were directed by Tim Bentinck (of David Archer fame) and Richard Blaine, a well established local actor, writer and director. Such a mix gives testimony to the spirit of the festival, with performers swapping through mediums and creating a proper community feel amoungst the theatrics.

Plays included thought-provoking and edgy The Girl Who Wasn’t There, a piece the aftermath of a drug fuelled booze binging evening. Ten-minute Cold Call caused a stir as a sympathic look about a disintegrating relationship in a call centre, with Bus Stop (written and directed by Daniel Allum) a comedic highlight. Allum is a great find as he clearly has keen ear for dialogue and sharp eye for character – certainly one to watch. Humbug, (written by Martha Loader) explores two estrange lovers meeting up after 9 years and uncovers the traumatic split causing a seismic rift between two upwardly mobile 30-somethings with a digital past that refuses to go away. Rosy Carrick’s performance poetry delivers as dense, passionate, thoughtful and entertaining. Overhearing her 5 year old daughter talking with her friend about the slaughter of pigs and cats was vividly funny and her recounting of those attention seeking ‘hole-in-the heart playground chums’ equally entertaining.

In the studio INK presented a cycle of plays focussed around the number 147, directed by Dugald Bruce-Lockhart. In Blood Pressure by Jan Etherington, Darrell Brockis played the sensitive vampire looking for a regular blood transfusion on the NHS with an endearing quality that captured all the comic elements of the situation. The Bogeyman by Wally Smith cleverly explored the feelings and character of Jim (beautifully pitched by Michael Shaw) as he rummaged and poked about the discarded possessions of the recently deceased man at number 147. However the standout had to be play 147. Here the wonderfully composed, stylish and succinct Penelope Rawlins – robot 147  – is brought home with understandable delight by Raymond (Michael Shaw). Scott’s play challenges ideas about men and relationships both intimate and platonic, and who can really be said to be in control.

INK Festival offers a diverse range of activities – 8 performance spaces with over 40 new productions, talks and workshops. Now in its third year it seems to be going from strength to strength, having started with around 15 new shorts plays in 2015 to recent submissions in the range of 200 new scripts and films – all by writers with East Anglian connections. There is work to appeal to all age groups, proving that regional that (and East Anglia in particular) is bursting with creativity!