A sticky, sparkly, vomiting, heartbreaking piece about millenials in a club toilet

Oh boy. Dames is a wonderful, sticky, sparkly, vomit-inducing tear-jerking mess and I absolutely adored it. Telling the story of six girls and their interactions within a toilet of a club, surrounded by a set reminiscent of a dirty, raving house-party in an incredibly fancy house, the six actresses totally smash a highly challenging script out of the park. 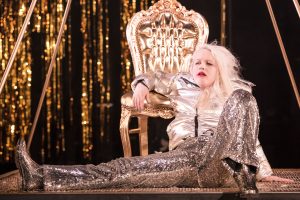 April Dalton’s set design – all golden streamers, feathers, loo roll and glitter – is a triumph. Intertwining the anarchic, chaotic club atmosphere with a surrealist filter, it’s trashy and frenetic, setting club toilets in an odd twilight world that feels like it’s on some sort of LSD. The six actresses are each wonderful – Olivia Elsden as the aggressively confused Bianca remains a confrontational lynchpin of the piece, with Melanie Stevens providing a slightly less well-developed Cardiff with an oozing, grimy sexuality. Charlotte Merriam, the lipstick-besmeared Erin, manages to imbue lines like ‘ok’ and ‘what’ with a level of meaning and hilarity that has the audience eating out of her palm, while Ellie Heydon totters around sucking a lollipop, the least ‘mature’ of the group as a newly-gay middle-class teenager – just completely bemused by everything happening around her.

But Merriam’s play, however garish and wonderful, does have an irksome tendency to step out of this shiny neon world to try and comment on the action happening within it. Arabella Neale (Kate) and Bianca Stephens (Ginny) bear the brunt of this decision – attempting to provide some sort of voice spilling grand truths which in no way fit the pulsing world of the piece. The madness of the plot twisting and turning backwards and forwards in time just about work if you sit there and just let it happen to you (think rollercoaster), but these metatheatrical sections are odd. Neale and Stephens both coped well with this layering of realities, but one can’t help but wish that we’d have been able to see their ‘true’ personalities shine without the clunkiness of this ‘I’m an actor’ trope.

Despite this hiccup, there is something infinitely lovable about Dames. Class, drunkenness, sexualities, insecurities all collide in a mad, golden, feathery explosion; the real world turned tail and slunk out the room long ago. It’s so rare to see women being vile and sick and confused and fierce onstage, conjuring up the fear and confusion that accompanies young millennials trying to find their identity in a world telling them that they’re entitled and wrong. Yes, one can completely understand that this play is not to everyone’s taste. But there’s something so garishly joyful about the shine, the tackiness, the mess of each of these six lives that I swallowed it hook line and sinker. Just leave out the chatting to the audience next time.