Before the curtains go up at the National Theatre’s production of Absolute Hell, the cast members line themselves up along the stage and sing “La Vie en Rose” – a curious prelude to a play about London’s notorious den of iniquity. Edith Piaf’s ghost nonetheless becomes an unlikely background presence in Joe Gibbons-Hills’s adaptation of Rodney Ackland’s 1950 play about a decaying drinking club with its equally as decaying punters. The references to ‘pink’, ’rosiness’ and the broken record player reveal the frayed screen through which many of these characters see the world in their endless quest to escape. 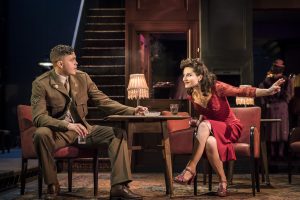 The play revolves around the entourage of Christine Foskett, the owner of the club La Vie en Rose, played by Kate Fleetwood, and washed up writer, Hugh Marriner, played by Charles Edwards. The panoply of characters – from American soldiers and leery, untrustworthy producers to doddery old women and a comically large critic and her assistant –  make for a dialogue that is often amusing and light-hearted. Patricia England and Joanna David, who play fellow club frequenter, Julia Shillitoe, and Hugh Marriner’s mother respectively, never failed to put a smile on my face as the P.G. Wodehouse-eque tottering old ladies. The instances of forgetfulness or misremembering – especially, the repeated joke of Patricia England’s character mistaking one of the fellow club-frequenters, Siegfried Shrager, with World War One poet, Siegfried Sassoon – functions as a funny introduction to the world of wackiness. Yet, as the play moves on, and indeed into the second act, those moments become fewer and far between, as the prevailing theme of destitution-cum-escapism starts to drag on.

If the first half of the play is an evening at La Vie en Rose in full swing, which is enjoyable to say the least, the second half looks to develop the characterisation of these bleary misfits and it becomes somewhat difficult to care. It felt as if I was reading rather than watching the second act insofar as the world that had been unfurled during the first half became two-dimensional, predictable and dreary after the interval. The use of the stage space in Absolute Hell is also rather disappointing for a lot of the hubbub (and along with it the atmosphere) is obscured by the stairwell that stands in the middle of the stage. With its two-dimensionality of character and its unnecessary tall-reaching blocks of stage design, Absolute Hell becomes difficult to penetrate and get lost in as a viewer, no matter how funny Patricia England’s character is.

If like me, you were hoping to catch a glimpse into the wacky world of Soho in its pre-Pret a Manger years, you sadly wont get much more than a mere peek of that universe throughout Absolute Hell’s three hour performance, lack of atmosphere and incongruous stage design.