Following universal critical acclaim, and a sold-out run at the Young Vic, producers Sonia Friedman Productions, Tom Kirdahy and Hunter Arnold are delighted to announce the West End transfer of the National Theatre and Young Vic co-production with Good Chance Theatre of Joe Murphy and Joe Robertson’s The Jungle, directed by Stephen Daldry and Justin Martin. The production is set in Europe’s largest unofficial refugee camp, the Calais Jungle, which in 2015, became a temporary home for more than 10,000 people.  Previewing from 16 June, The Jungle will have an Opening Night on 5 July at the Playhouse Theatre. The first wave of tickets will go on general sale on 15 March. 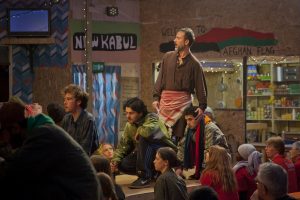 The Jungle will transfer to the Playhouse Theatre in the West End, where the traditional proscenium theatre will undergo a remarkable transformation. The auditorium stalls will be completely reconfigured to house Miriam Buether’s critically-acclaimed set design as seen at the Young Vic, where audiences were invited to sit at the benches and tables of the Afghan café in the Calais camp. The Dress Circle will be renamed “Cliffs of Dover” and will allow unique views over the performance space, which extends out beyond the proscenium arch and over the stalls. This in-the-round transformation will reduce the capacity of the theatre to 450 seats, to more closely recreate the intimate and immediate experience audiences had at the Young Vic. Top price tickets are directly enabling 40% of the house to be priced at £25 and under, and a proportion of tickets will be held off sale to be offered to refugees and targeted groups in order to maximise diversity and accessibility.

This is the place where people suffered and dreamed.  Meet the hopeful, resilient residents of the Jungle – just across the Channel, right on our doorstep. The Jungle tells stories of loss, fear, community and hope, of the Calais camp’s creation – and of its eventual destruction. Join the residents over freshly baked naan and sweet milky chai at the Afghan Café, and experience the intense, moving and uplifting encounters between refugees from many different countries and the volunteers who arrived from the UK.

Official charity partner, Help Refugees, will be supported by the production, with fundraising efforts taking place at the venue throughout the entire run.

Joe Robertson and Joe Murphy said: “The Jungle was a reluctant home for thousands of people from all over the world. It was a place where people built temporary lives and communities formed out of necessity. People who visited asked why we built a theatre in a refugee camp, but it’s always seemed clear to us that theatre should be at the centre of the conversation. That’s why we’re thrilled to bring this play to new audiences and to the West End, in a totally transformed Playhouse Theatre, a stone’s throw from Parliament. The metamorphosis of the Playhouse is a bold statement: that we need new spaces for this conversation to happen, and that the stories of the people in this play belong on our most significant stages.”