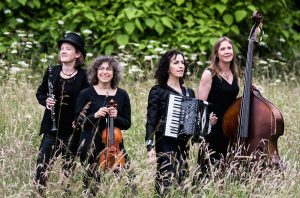 Women’s experiences across generations and cultures are represented in I’ll Say It Again; a diverse festival celebrating pioneering women, both historical and contemporary, telling stories of resistance and protest, civil rights and friendship, migration and liberation. I’ll Say It Again! is a month-long festival of work by multicultural artists – local and international – from the worlds of theatre, music, poetry, food and dance.

I’ll Say It Again! will take place in the lead-up to Processions, a national mass-participation artwork on 10th June in collaboration with Artichoke tracing the historic march by women through the streets of London in June 1918.

The festival will be launched on 2nd May with a visit from BBC Radio 4’s The Listening Project in a free event featuring a collection of dynamic, funny and moving conversations between different generations of women, straight from the British Library’s audio archives. Led by broadcaster Fi Glover, artists from the festival will also be sharing their stories and the event will be recorded for broadcast on 5 May. Staged as part of the annual Wandsworth Arts Fringe and programmed by Tara Arts, other highlights of I’ll Say It Again include

Speaking about the festival Jatinder Verma, Artistic Director of Tara Arts said “From Jocasta to Gandhari, Eleanor to Jayaben and Billie to Babs, I’m delighted that Tara Theatre will be hosting the explosive creativity of I’ll Say It Again! to mark Britain’s centenary of women’s right to vote. Diversity is in Tara’s DNA and this season signals Tara Arts’ determination to connect artists and audiences in joyous diversity.”

Writer and Tara Arts Trustee Preti Taneja said “This is a time to celebrate women’s creativity and strength, and to give voice to our lives, achievements and experiences across the ages. Recovering lost histories and revealing hidden stories, showcasing emerging female talent alongside critically acclaimed women across cultural fields has been Tara’s signature over four decades of theatre in the UK. Equal rights begin with the ability to imagine a new world – and that’s where women creative artists take centre stage. I’ll say it again! is an extraordinary marker of women’s political activism and I’m delighted to be part of it.”