Review of: Summer and Smoke

Rebecca Frecknall’s version of Tenessee Williams’ Summer and Smoke is so nearly a glory to behold. A strange, wandering piece about lost love, childhood fantasies and two people’s fight to find themselves in a confusing world of casinos and churches, Frecknall moves her characters around the stage with the lightest of touch. Boxed in by nine upright pianos and nine (often less-than-upright) chairs, the staging is totally and utterly focussed around the personalities of those onstage, without anything to distract. There’s a whiff of the acclaimed 2014 View From A Bridge about the production – whittled down to the bare bones, tightened around Williams’ language and the complexity of the character relationships without having to worry about naturalism or scenery to tell the story. 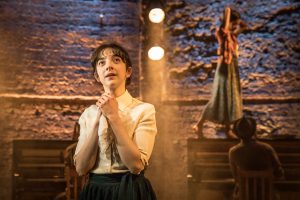 Patsy Ferran is utterly glorious as the anxiety-ridden Alma, twitching and laughing along to societal rules, tripping around the stage, never too close to anyone but also seeming unwilling to stray away. The scenes between her and Matthew Needham are a masterclass in tension; these two could talk at each other for hours on end, day by day, and I’d be there watching to the end. They tell so much in one small movement, one breath, feeding off each other in some of the most wonderful collaborative acting I’ve ever seen on such a stage. Backing up with intense multi-casting (with often only a prop or a hair tie to distinguish) are Anjana Vasan, Tok Stephen, Forbes Masson, Nancy Crane, Erci Maclennan and Seb Carrington. What A Cast.

Frecknall’s direction is ingenious, tight and utterly, utterly gorgeous, intertwining with Tom Scutt’s design in a melodious, twisting way that hints at more great things to come. However, there are some issues around linking moments, specifically moments when time passes and people change. The way this Summer and Smoke is constructed (choices in costumes, set and movement) means the characters do not exist outside the stage. They are hemmed in by pianos, sound effects, stylistic choices that construct an entirely onstage world that doesn’t necessarily reach past the wings. And when having to signify time changes, personality changes, belief changes, there is not enough time for the audience to catch up with logistics and with what has happened in the pauses in between the scenes. Not signifying any of this passage of time is a brave move, absolutely – never doubt the intelligence of your audience – but one that ultimately obstruct Frecknall’s otherwise godly storytelling power.