Review of: Moonfleece at the Pleasance

This powerful testament to our times pulses with energy and tension.

Back in 2010, in the wake of increasing electoral success for the British National Party, Philip Ridley’s Moonfleece toured around many of the UK’s far-right hotspots. Centred around members of a fictional nationalist party, the production was banned from its Dudley venue by the local council (in a move that was widely perceived as an appeasement of the local BNP support base). Eight years on, the timing of Lidless Theatre’s new staging of Ridley’s play is pertinent—this incisive piece feels familiar and relevant in Brexit Britain.

But Moonfleece isn’t a play about the mechanisms of the far-right. It’s a play about how the personal becomes political, about how we tell stories to ourselves and our loved ones to make sense of the world—and how those narratives have real-world consequences. It’s a play about trauma, grief, family allegiance and the poisons of racism and homophobia. 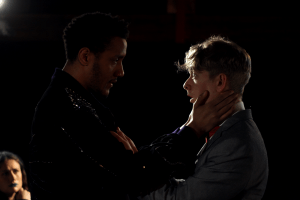 Curtis, golden boy of his step-father’s nationalist party, returns to his East End childhood home searching for answers about his dead brother. In this cramped tower-block flat, we meet Curtis and his far-right cronies, as well as the squatters who now live there, an ex-girlfriend from Curtis’ past, and her vibrant liberal friends. As Curtis, along with this unusual assortment of characters, learns more about his beloved brother’s story and the truth about his family, we are taken on a rollercoaster ride by excellent performances from the bold and committed young cast. James Downie particularly impresses as Curtis in a perfectly-paced, nuanced performance of a bereaved young man whose intolerable worldview rests on insecure foundations.

Max Harrison’s production is raw, gutsy, noisy and packs a punch in the small StageSpace theatre. The relatively large cast crammed into such a compact space works well for the claustrophobic setting of the show, but (perhaps inevitably with so many bodies in such close proximity) the stage sometimes feels just too small to contain the dynamic energy of the performers; there is sometimes awkwardness in the staging and movement of performers in relation to each other and the environment.

While it’s easy to imagine that a play with such profound themes would be deeply depressing, Ridley’s script is punctuated with humour, and is often laugh-out-loud funny. The show is thoroughly entertaining, and never feels like it runs out of steam. It’s unpredictable, explosive, touching, and throbs with energy and tension.

This Moonfleece revival is a powerful testament of our times, and a warning against the destructive power of hate, bigotry and hypocrisy. Catch it before it finishes on 15th April.