Review of: Kiss of the Spiderwoman

An ephemeral experience that transcends its own boundaries of space, form and time

Since its publication in 1976 as a ground-breaking, stylistically complicated novel, Kiss of the Spider Woman by Manuel Puig has been adapted into several forms, including of course the iconic 1985 film starring William Hurt and Raul Julia. Despite its many manifestations, it remains wildly intangible, an ephemeral experience that transcends its own boundaries of space, form and time. 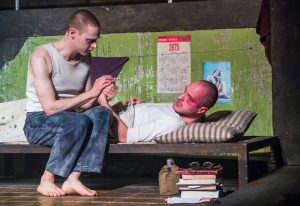 he space is artfully indicative of a prison: there is a pervasive, peeling dirtiness, and several worn blue cell doors range along the walls above a walkway. Their blank, barred windows seem to stare out across the acting space and into the audience in a strange mirroring effect: they almost become secondary spectators, as though this production is staged in the round rather than on two sides. The acting area is a combination of small tiled cell-space surrounded by heaps of tumbling rubble and it seemed suspended in the centre of the room, somehow, as if it were a hologram that might disappear at any moment. This effect was heightened by the excellent use of projections, which crackled along the back walls in a grainy black and white wash of stories, or more accurately, memories of stories, as Molina narrates the plots of Hollywood movies to pass the time with his cellmate, Valentin.

The two characters that find themselves sharing a cell could not be more different – Molina a homosexual window-dresser, in prison for “gross indecency”; Valentin a political prisoner, jailed and tortured for violently defying the regime. Puig himself wrote that these two characters are “two sides of the same struggle for human dignity”, and this truth rings through in this particular production. Samuel Barnett’s utter magnificence as Molina cannot be overstated: his was a fully embodied performance, a cascade of expression, emotion and significance that was breath-taking to behold. His Molina was camp and effeminate, at times nervy and fizzing with a barely controlled hysterical energy: yet, beneath this one sensed a spine of pure steel, a ribbon of strength and nobility running through the character.

Declan Bennett, as the revolutionary Valentin, only began to match this magnificence about half-way through the play. Up until this point, his portrayal of a classic stoic masculinity – the strong and silent type – was strong and silent to the point of being quite wooden. When he began to open up and express more in the mid- and later stages of the production, I felt perhaps that this had been an intentional parody, an expression of his being bound in the unforgiving straight-jacket of a masculine stereotype. Either way, the disappointing first impression slowly gave way to a beautiful interpretation of character: Bennett’s Valentin flourishes through the rest of the play, and he ends in positively iridescent form. There were moments of real emotional connection, such as the dictation of a letter to the woman Valentin loves, which was exquisitely moving and executed with such an intensity of truth and desperation that I felt Bennett transcended the moment of the role and became an everyman of human suffering.

The actors were aided by, for the most part, a gorgeously written script, stumbling only on some trite interpolations, and the occasional modern clanger such as “you took one for the team”. There were also a few totally unnecessary expletives thrown in which only served to draw the emphasis out of the following words and which were uttered with such a lack of commitment from the actors that one couldn’t help but feel that they too thought these unnecessary peppering. These failings were more than made up for, however, by the woozy descriptions of the films: vivid, nostalgic and glamourous, they combined with the projections and the engagement of the actors to create a total immersion in the exotic worlds of the movies.

Kiss of the Spider Woman is an exploration of the essentials of humanity, the nobility to be found in the most basic of human interactions: humiliation is overcome through human relationships, through an acceptance of the body, through a refusal to fall into learned patterns of disgust and rejection. It is quite simply a purifying experience, and as water cascades onto the stage in the final moments of the production, we feel that we have witnessed something miraculous, and emerge into the night, our minds busy with new and poignant ideas