Review of: The Great Wave

A thrill-ridden, storming ride through a very specific angle of Japanese and North Korean relations, The Great Wave is a quasi-filmic version centring around kidnappings of Japanese citizens from 1970 to around 2000. When Hanako gets abducted from the beach by North Korea to teach Korean spies Japanese, her mother (Etsuko) and sister (Reiko) spend nearly 30 years chasing journalists and politicians to explain what has happened to her – and to try and get her back. It’s an amalgamation of a family’s private pain that takes on a global dimension within the shifting East Asian political climate. 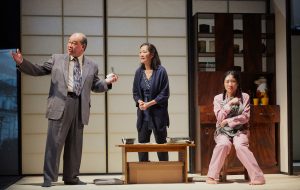 Tom Piper’s design almost seems to float around the stage, creating boxes of action where Kirsty Rider (Hanako), Kae Alexander (Reiko) and Rosalind Chao (Etsuko) are continually kept separated. Rider is a phenomenal central performer, shedding her teenage recklessness over time but nevertheless keeping a core of steel, visible to all in the audience even when Hanoko herself doesn’t know it is there. Alexander and Chao also fare well, but are left with the more difficult part of the narrative to portray, having to emotionally yo-yo from anguish to acceptance to despair over and over again with very few stages in-between. While the political side of the drama is beautifully captured, these conflicting emotional states means it takes until deep into the second half to actually comprehend the agony that Hanako’s disappearance has caused her family, with a video tape that reaches the woman in Korea around 20 years after her disappearance. This is the emotional heart of the piece, and a moment pitched to perfection by director Indhu Rhubasingham.

The trickiness with The Great Wave is that there is just so much plot to wade through that there isn’t quite enough time to hit the deeper character development and explore the psyche of those suffering. The first act has to get through so much exposition that the emotions associated with Hanako’s abduction don’t really have time to settle, and it makes those onstage struggle to reach the expected extremes of feeling within only a couple of lines. The narrative itself is tense and clear, developing to the most unimaginably heart-wrenching final image (I was in bits), but it takes a while to engage emotionally instead of just piquing one’s interest.

It’s a good play, but not a great one. However, marking one of the few high-profile theatrical pieces that tells an East Asian story with an entirely East Asian cast, and equally considering the current state of diversity within British theatre, it seems a landmark production in terms of equality and representation onstage. While this isn’t necessarily enough to forgive The Great Wave its faults, it’s certainly enough to make one keep an eye on Francis Turnly’s future projects, and hope that other artists, venues and companies are galvanized and inspired to continue developing this particular conversation.