A deeply resonating, highly relatable tale of growing up in a confusing world and reacting to the pressure on females to always play by the rules.

One-woman shows seem to be making a pretty intense comeback recently. Following a lauded run at the Edinburgh Fringe Festival in 2017, Naomi Sheldon’s hard-hitting Good Girl is in the middle of it’s stint at Trafalgar Studios – and by god, is it a cracker. 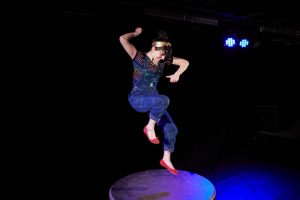 Sheldon is sparking and unapologetic in her delivery. Looking at mental health through 1990’s goggles, her character GG continually struggles to be able to express her experiences and feelings, as society doesn’t have the same linguistic tools we possess nowadays in order to talk about mental health. To fight against this, GG makes up her own words to at least try and categorize what she is feeling (a ‘Swayze’ is her choice for a ‘tingling of the fanny’). Surrounded by gender relations, sex, vaginas, GG stumbles through a world with so many unwritten ‘rules’ about how to behave that they sometimes overwhelm her in moments of intense dramatic clarity, images seeming to float in the air as Sheldon describes them.

There’s something biting about her honesty, a young woman tripping through the world trying desperately to come to terms with her emotions, to put her worries and anxieties into words that adequately describe them. The entire piece is about emotions that are not felt when they should, a pointed lack where feeling should be, and an anger that bubbles around without any particular venting point. Sheldon is riveting as a performer, managing to marry a wonderful, dirty humour with what can only be described as a morbid fascination in GG’s own lack of empathy.

The darker twist towards the latter half of the show only works because of the lines of sympathy and the laughs meticulously created between performer and audience in the beginning. A deeply resonating, highly relatable tale of growing up in a confusing world, reacting to the pressure on females to always play by the rules – be nice, be charming, do what you’re told, be a good girl.