23:00 Records part of Club11 London are delighted to announce the title for award-winning West End star, YouTuber and best-selling author, Carrie Hope Fletcher’s debut album – When The Curtain Falls. Now available to pre-order from iTunes, the album is released on Friday 30 March. 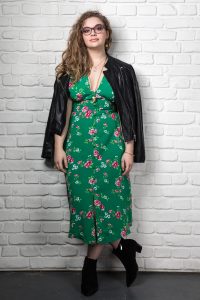 The hotly anticipated album will feature some of Carrie’s favourite musical theatre songs covered in a way that listeners won’t have heard before. Today Carrie is delighted to share the tracks on the album will include Journey To The Past, What It Means To Be a Friend, Burn, Times Are Hard For Dreamers, I Dreamed a Dream, No One Else, Summertime, They Just Keep Moving The Line, Somewhere That’s Green, Let It Go, You Matter To Me, I Won’t Say I’m In Love, some of which are to be performed at the previously announced concert at Cadogan Hall on 31 March and 1 April 2018.

This follows on from an incredible 2017 for Carrie with the release of her third book All That She Can See, a critically acclaimed UK tour of The Addams Family and a starring role in the new musical The Christmasaurus.

Carrie Hope Fletcher is an award-winning actress, YouTuber and best-selling author. She has recently appeared in The Christmasaurus Live (Eventim Apollo, Hammersmith) and has completed a nationwide tour of The Addams Family, which included a televised performance on Tonight at the London Palladium. Other theatre credits include Chitty Chitty Bang Bang and War of the Worlds (UK tours), Les Miserables (Queen’s Theatre), Wind in the Willows (Regent’s Park Open Air Theatre) and Mary Poppins (Prince Edward Theatre). Her television credits include In Two Minds and Break Kids. Her forthcoming book, When The Curtain Falls, publishes in hardback in July 2018: a spellbinding, ghostly love story that takes place amid the special magic of the theatre – a setting that Carrie knows, and loves, so well. It follows the Sunday Times bestselling novels On the Other Side and All That She Can See and the No.1 bestselling memoir All That I Know Now (2015).