Review of: Be Prepared

The door closes, the lights go down. After a minute or so’s expectant silence, a man gets up from the audience – awkward and painfully shy, he steps onto stage cradling a plastic keyboard and gives us a trembling smile. This is Tom. Tom is at the funeral of an old man (Mr Chambers) who called him multiple times a day for the last month, confused, having misdialled the number of the funeral home. Tom has a couple of unresolved issues concerning grief. 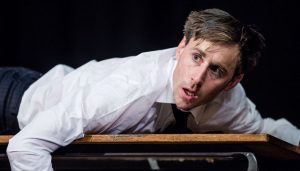 And so Be Prepared stars on a touching, meandering, hour-long exploration of death and the memories that surround it. Jumping between Tom’s own personal experiences based around the traumatic demise of his father, and the heart-breakingly cracked narration he receives down the phone, Bonar gives a virtuosic performance as the tremblingly apologetic, quietly explosive Tom. The piece is a gorgeous exploration of the thinness of the skeins that separate people’s lives – one digit of a phone number able to bring two people colliding together, and just as swiftly separate them

Bonar treads through the piece carefully, switching between randomly collected memories, regrets, small and unimportant betrayals. However, the moments that are the most exquisite, that possess the most power, are those where he takes on the voice of Mr Chambers – stringing words and phrases together randomly, totally indicative of a mind riddled with dementia, yet still containing the most hauntingly poetic beauty. This isn’t just a piece about one man’s struggle to cope with grief, it looks at the narrative we attempt to impose on each other’s lives to give some sort of ‘meaning’ to life and death. With Mr Chambers, this narrative isn’t linear, isn’t chronological, jumping from disparate thought to clichéd saying to further disparate thought. It shows us the state of our minds when released the veneer of logic that normally wrestles them in to shape, free to wander wherever it chooses in the past or present.

Bonar gives what could be a very cloying, heavy show a lightness of touch and a wonderful, bubbling humour. There’s a certain quality to the way he stares into your eyes when asking questions that actually make you want to answer. Stringing together details and memories, there’s a fragility to his performance that is hard to forget – the pictures he paints are faint and feel as if they’d be blown away by a stiff breeze. Haunting stuff.