Review of: Party Skills for the End of the World

There are many things I’m not good at in life, and Party Skills at the End Of The World seems to point these out with a joyous abandon. Balloon animals, throwing darts, constructing crossbows out of stationary materials – I think it’s fair to say that, if faced with the end of the world, my survival skills would be in pretty poor nick. However, having left Shoreditch Town Hall with various failed creations, I had to admit that I didn’t hugely mind – the immersive performance was beautifully done and cleverly created, but any sense of jeopardy about the end of the world actually happening seemed rather distant. 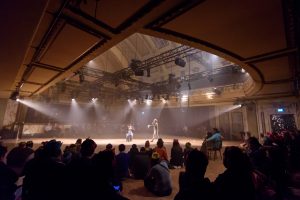 The piece sells itself as a mixture of party and apocalypse – there are some sections where this is hugely successful, and other where the comparison is rather shoehorned in. It’s an interesting connection, sure, but I’m just not convinced the reason for this comparison was explained in enough detail to merit the show. Helicopter signals look like dance moves, the winner of musical chairs gets chained to the chair and consequently shown how to escape – interesting, yes, but the message or the underlying link between party hats and nuclear apocalypse was slightly obscured, and the sense of threat therefore undermined.

However, the underlying blend of reality and fiction is nonetheless fascinating. Immersive theatre plays with the idea of ‘worlds’ – the usually well-defined ‘audience world’ of the auditorium kept streets away from the ‘performance world’ of the play in the more traditional theatrical form. Here, actors reciting their name and address before each individual section clashes with any idea of ‘character’ or ‘persona’ traditionally associated with the acting profession. It means that, when they stride blankly out from glitter curtains with ash-covered clothing singed around the edges, this fictional world of apocalypse and doom is less fictional after all. This imagery is haunting – there’s an uneasy crossover between a cat-walk style traverse staging, parading people in front of us like models, becoming increasingly sinister the more time goes on and the more dust and blood they accumulate.

Ben and Max Ringham’s soundtrack/score is blazingly good, guiding the audience in terms of emotional connection and reactions. It is telling, however, that around 40 minutes into the play I was wondering whether this kind of theatrical piece was the best way to portray the clash of party games and apocalyptic safety measures – the most successful parts were easily those where we got our hands dirty and got involved (hello orange stitching) instead of being lectured at by actors (a long recitation of modern woes isn’t exactly thrilling stuff). It is therefore the latter part of the show where the concept seems to truly click – being able to wander around in the mazey cellars of Shoreditch Town Hall, learn how to play the guitar, throw a punch, create a huge array of paper flowers. Party Skills For The End Of The World is a curious beast, but is at its best when it lets its audience creates links and comparisons for themselves rather than imposing observations upon them.