Review of: On Monday Last Week

Skilfully acted and with some interesting sections, this play still never really comes in to its own.

Adapting On Monday Last Week by Chimamanda Adichie into a stage version is rather a difficult task – the plot functions so perfectly as a linear, book-bound narrative that one does wonder how it might be successfully transposed to stage. Saaramaria Kuittinen’s adaptation keeps the pace and flavour of the original, but the limitations of the Etcetera space and some staging decisions underwhelm.

The plot follows Kamara, a young Nigerian woman, quickly married to her university love Tobechi so that he can go and find work in the USA for her to follow after a while. Six long years pass, and when she does finally makes the journey she’s confronted with a very different man than she originally married. Lonely and disillusioned, Kamara is hired as a nanny by a wealthy liberal American family and starts to develop conflicting feelings towards the often-absent mother of her charge. 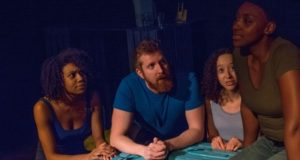 Shireenah Ingram was mesmerizing as Kamara, infusing the character with a warmth and a patience that provides a wonderfully steady through-line during the time jumps and winding narrative passages of the story. However, the physical additions that accompanied Kamara’s one-woman sections, while aesthetically beautiful, served only to disrupt what could have been a wonderfully intimate relationship between Ingram and the audience. The constant shifting and moving of the set pulled focus away from the actual meat of the tale, when the words were all we needed to be emotionally invested in her story.

Stephen Bradley was grand as anxiety-ridden dad Neil, with Natalya Martin and Koral Neil providing solid backup as the other members of his rapidly-disintegrating family. However, despite the quality of the performances on stage, it’s very clear that the whole thing was nothing more than an adaptation of a pre-existing take. It never felt like the company had true ownership of the characters, but were rather enacting someone else’s vision of them. Staging the piece also draws attention to the fact that this is a play of two halves – of Kamara’s experiences with Tobechi, and consequently her lustful relationship with the mother of the child she’s supposed to be looking after. These two feel rather disjointed, especially seeing as the most interesting and character-developing section (when Kamara comes over to America to join Tobechi) is pushed to one side completely to follow a much less interesting tale about Kamara’s misplaced infatuation.

It just never feels like this piece lives up to its full potential – all conversation could have been developed further, dug deeper, given us more insight and more emotional access to the characters. As such, it never really comes into its own as an adaption – I feel like I need to read the story in order to properly appreciate the themes of the piece, with the play acting as a trailer. Skilfully acted and with some interesting sections, On Monday Last Week still never really comes in to its own.