Dina Gordon, the elusive Joy, is talking to herself. Or rather, she is talking to the mysterious ‘John’ in a post-coital stream of consciousness that meanders from subject to subject on the flimsiest of connections. She had had sex with him, she has bananas, now she is having a rave. We are not invited. 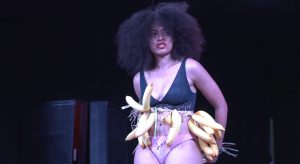 It is rare to come across theatrical pieces that have such an intentional, wonderful disregard for the audience they are performing for. This isn’t a piece about joy or happiness (it’s actually very hard to figure out what is it about) with the pulsing beat of the words and the music lulling you into a sort of stupor where meaning is irrelevant. Don’t try and understand because (oddly) I feel that would miss the point of the piece altogether – it has a hypnotic quality to it, a request to leave reason at the door and just rely on experiencing the moment without the need to impose any sense.

The live music by Andrea Giordani is ridiculously impressive, managing to link enough of the fractured narrative (if it can indeed be called a narrative) to create a flow throughout the play. However, there are moments where this seems somewhat disjointed, most noticeably around sections reminiscent of physical theatre – it takes such a while to get used to the headspace needed for Joy that jolting us in and out of these physical sections as well alienates us to the point where re-entry becomes rather difficult.

Bananas features. Why they feature I’m not quite sure, but they’re definitely more than present. As is probably clear, writing about this show in any sort of intelligent fashion is actually incredibly difficult – there are shows that you don’t understand or don’t necessarily even like, but there’s something about the way that they are portrayed that haunts you days after the event. It’s incomprehensible, but I don’t really care. The pounding bass, flickering lights and water dripping from the ceiling sucks you in, Gordon’s changes between intense vulnerability and screaming anger takes you into a different world. It’s a stewing-pot of inspirations – aftermath of sex, the African Diaspora, body imagine and identity all jumbled up and thrown unapologetically into your face.

I have no doubt Gordon, Gamble and Giordani know exactly what and why they have made this, and the alienation of the audience is utterly intentional. We are uncomfortable, bemused, forced to face something we cannot understand – to all intents and purposes, are not meant to understand. While this isn’t generous theatre, it has an infectious energy that drags you along with the flow, defying interpretation.