Anonymous is a Woman’s play Think Of England, coming to the Vaults Festival later this month, is a story about two women hired to travel the country and host morale-boosting tea parties in the midst of the second world war. We caught up with writer Madeline Gould ahead of the show opening. 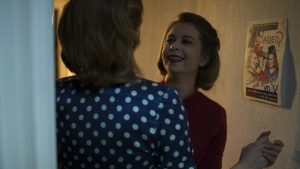 Tell us a bit about Think of England – not just what happens, but what kind of show it is.

It’s an immersive play that tells the story of World War Two by zooming in on one small community and the events of one night. It’s a nostalgic piece that invites the audience to revel in the joy of a tea dance whilst also exploring the constant presence of danger and the inherent melancholy of living in a world at war. It’s also an exploration of gender politics and how, if at all, those politics have changed since 1942.

How did you find the story of Bette and Vera?

Technically, my Dad found it! There was an exhibition of local history in Bradwell village hall about 20 years ago and he read the inspiration for premise in a wartime newspaper. When he told me about it, I was hooked on the idea. We have this notion that women didn’t have casual sex with men before about 1965 and, if they did, they were social outcasts. When I started my research and learned that, among other things, it was common to see couples having sex in dark corners during air raids, I wanted to explore the sexual liberation that the war afforded women like Bette and Vera and what the consequences of that might be in a small community. I tried it as a feature film and a mini-series before finally finding the perfect format through the rural touring model.

What about Think of England, and the lives of historical women it shows, speaks to women in 2018?

The big thing is the absolute injustice inherent in the difference in attitude towards men who have casual sex and women who do the same; the idea of the cad and the vamp which, I think, is still prevalent today. There’s also a massive tug of war between the desire for the women to be valued as more than just sexual beings and the desire the embrace their sexuality as part of their identity, which I know is a very modern dilemma, especially in the current climate.

What is it about Vaults that excites you to have the show on there?

For a play set during the Blitz, I can’t think of a more perfectly atmospheric setting and I can’t wait to see what effect being in an old air raid shelter has on the characters and the audience. Because it was originally developed for rural settings, I’m also intrigued to see what happens when the action is reset in an urban location. The Vaults is one of the most exciting venues in the country and the festival, for me, is one of the absolute theatrical highlights of the year. To be part of it is an absolute joy for me personally.

What’s next for Anonymous is a Woman?

We are working on a new writing piece about Female Astrophysicists which is set for a studio tour, we have some very exciting partners on that project but at the moment everything is top secret!

We are also working on our next Rural Touring show It Is Now– an immersive show set at a Wedding reception on the same day as the 1966 World Cup final again written by Madeline Gould.

And as if that wasn’t enough we developing an adaption of a classic text with a female lead, which will be on a larger scale than any of our previous work. We are very excited about it and hope our audience will be too!

We are hosting a workshop on Women Writing for Rural Touring on the afternoon of the 10th of Feb at VAULT and would love to meet some brilliant females (and males writing great female parts) there! We we are also doing two 50/50 events at VAULT, on the 1st and 4th of Feb, and have had some brilliant submissions, some of which are extracts from VAULT shows, making it a great way to get a taster for what you may want to come back and watch. We hope to see lots of people there supporting the gender-parity cause!

Madeline Gould studied English Literature at Newcastle University before training as an actor at LAMDA. Her plays to date include: Boxer, Beetle adapted from Ned Beauman’s award winning novel (Local Girl Productions) which won a slot at Small Stories, Big City at Rich Mix in 2015; The Princeless Princess and the Princessless Price (Queen’s Theatre, Hornchurch); Ladykiller (The Thelmas) which she is currently extending to a full length production; Think of England (Anonymous is a Woman Theatre Company). She is currently working on It Is Now, a new comission from AIAWTC set to tour in early 2019 and Dead Leg, a dark romantic comedy set in a mortuary.