A fast paced one-man Western that is both spoof and homage to every great Cowboy film. William Hartley's creativity, legerdemain and comic timing are a real treat.

A man’s gotta do what a man’s gotta do – and for Roscoe Porter that means avenging the death of his virtuous sheriff brother John, finding the mysterious masked killer Omega and disposing of the key to a mass killing machine. If this all sounds clichéd then good – William Hartley’s one-man show, Gun, is a hilarious Western that is both a glorious spoof and homage to almost every great Cowboy film. 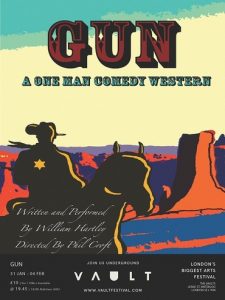 Evil, bigoted, businessman Martin Valance has created a killing machine designed to murder the entire “Injun” population and is determined to get rich selling it. Having hired Omega to kill the sheriff it seems that there is nothing that can stop him – particularly when he enlists the help of femme fatale Miss Van Cleef to retrieve the key to the machine from Roscoe, which was entrusted to him before his brother’s death. Can Roscoe resist her seductive advances? Can he catch Omega and avenge his brother? Cue tense scenes around campfires, train top chases, a seduction and violent confrontation.

At the outset, the puns and references may seem a little contrived but, as the show develops it’s frenetic pace, Hartley’s story telling and legerdemain (he produces cards, water and all manner of props with great comic timing) becomes a tour-de-force. Fans of the genre will enjoy spotting references to every Spaghetti Western, True Grit, Shane, The Man who shot Liberty Valance and many more, and, put together, the narrative has a perfect pace for a one hour show. After a very clever broken watch analogy, Roscoe’s seduction over a game of cards is pure comic genius, and the subsequent sex scene (remember one man is playing both parts) is a triumph of ingenuity.

Written and performed by Hartley, who has experience working with Griff Rhys Jones and the radio sketch group Clever Peter, Gun is ably directed by Phil Croft and is a great start to an evening. Just remember – if you are going to kill someone, make sure they are dead.