Gentle satire exploring the limitations of a life in the arts.

Elsa is a rather gentle comedy show taking the piss out of the millennial generation; all café lattes and soya milks and china cups and light streaming in through hipster café windows. Witty yes, but I wouldn’t exactly label it as biting satire – more quietly nibbling away. 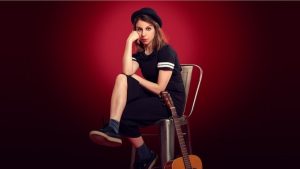 Isobel Rodgers mixes song, a couple of more monologue-y sections and her rather unique branch of humour to tell the story of Elsa, a budding actress who’s found herself working in a café instead of treading the boards as she dreams. She watches the customers, listening to their seemingly petty lives ‘stuck’ in this middle-class, frothy world of boys and success and gluten-free breadsticks. But Elsa doesn’t belong here, no, Elsa feels like she’s becoming increasingly distant and has the ability to judge others on the shallowness of their dreams.

It’s witty, funny in a polite chuckling way, less of a laugh-out-loud romp. Rodgers’ lyrical talent is truly amazing, weaving us into a world where successful women flutter like geese and waitresses stand on café counters to rap and pour semi-skinned milk all over themselves. Her voice is bell-like, trilling away in a fashion that seems to suit the lightness of the subject.

However, a piece describing the mosaic of posh people coming to a hipster café told through the eyes of a wannbe thesp is rather specific humour for a rather specific audience. It’s definitely perfect for the drama school graduates of the world, and wonderful at VAULT Festival, but the intense middle-class-ness of its subject matter makes one wonder whether it has legs enough to stand elsewhere. There are some moments of brilliance, true, and is perfect at revealing the limitations and hypocrisies of a life in the arts, but it’s hard to consider it more than the sum of its parts.