An entertaining evening at the theatre where the cast seem totally focussed on getting back to the bar as quickly as possible.

I don’t quite know what Droll is. Or how it has come to exist. Think really (wonderfully) bad Shakespeare, Chaucerian-esque tales that can only be described as ‘bawdy’, lots of facepaint, a generous slosh of sherry and an enforced drunkenness test at the start of the evening (I’m not sure this bit was true but I really hope so). You’re about halfway there. 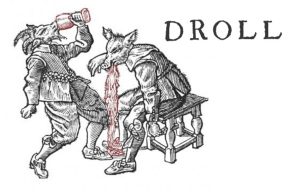 The framing narrative of the ‘droll’ theatrical traditions is intensely interesting – after the ban on drama during the Puritanical years, small troupes of actors used to gather in pubs around the country to act very very bad plays in front of a sozzled audience. These ‘drolls’ aren’t mentioned in theatrical canon and, as we’re rather solemnly told, are the ‘missing link’ between the Renaissance and the Restoration. They use all the comedy tropes that trickled down from Chaucer’s day, and are a direct ancestor of most of the comedy programmes and stand-ups that permeate modern society.

All this academia and you’d be forgiven for assuming that Droll is rather dry. I can categorically promise that, while it might not necessarily be a ‘good’ evening at the theatre, it’s definitely an entertaining one. The cast seem surprised to even find an audience there, and are totally focussed on getting through the entire script as quickly as possible, with as much tomfoolery as possible, before probably heading back to the bar the moment the piece ends. And, to be fair to them, it’s not exactly highbrow stuff (although whistling through at a pace of knots doesn’t make it easier). The issue is that the whole piece feels like an intense in-joke, laughing at the story instead of giving any access to the humour within it. This means that many of the wordy bits are skipped over as quickly as physically possible, with the audience sat there rather bemused and feeling stupid because they can’t follow the narrative. We’re asked to simply ‘take the actors’ word’ for it being amusingly bad, instead of allowing us to reach this conclusion for ourselves.

This isn’t to say there aren’t great sections – milk features rather heavily, a slightly abstract ‘door’ seems rather worse for wear at the end of the evening and an earnest apology for the amount of windmill jokes that were scattered around the script were all wonderful moments. However, the troupe need to take the audience on the journey with them, instead of slapping us in the face with an already-formed decision about the droll’s merit.