Carmen, with its lyrical, familiar tunes and story, is arguably an opera ripe for musical theatre adaptation. Enter The Phil Willmott Company, whose adaptation of Bizet’s bestseller deserves applause for its innovation and ambition. Carmen 1808 – brave and novel, but ultimately a production trying to combine too many ideas, with a musical approach that doesn’t quite fit with the music.

Willmott has bruised and stretched the rhythms and colours of Bizet to fit a libretto that situates the opera in the Napoleon-invaded Spain of 1808, told through the eyes of artist Francisco de Goya. The new setting works well – new-to-opera audiences are catapulted into the drama immortalised in Goya’s Los fusilamientos del tres de mayo, while in-the-know audiences get the fun task of recognising the original music in new lyrical clothes. Expect a Chanson Bohème turned Chanson Narrative and a Toreador rebellion anthem. Carmen, passionately portrayed by Rachel Lea-Gray, is a freedom fighter who uses her sexual allure to defend Spain against the French, seducing Captain Velarde (Maximilian Marston) into defying Napoleon. However, it was upsetting to see a Carmen so completely stripped of agency, who transforms into a bland plot device meant to facilitate Velarde’s eventual union with the rest of the rebellion. 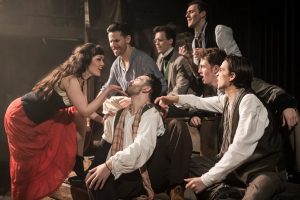 Unfortunately, Bizet’s glorious melodies and the jolty, belted singing style do not mix well, at times leaving arias and duets sounding awkward and falling flat. The production’s bold medley of ideas and genres – Goya’s mise en scène meets Carmen meets Les Mis meets Romeo and Juliet with a Phantom  ‘All I Ask Of You’ love duet – also feels like too much. A production setting out to reinvent a classic needs to be airtight, and Carmen 1808 ultimately presents a too-fast, too-many-elements retelling which leaves its audience overwhelmed and struggling to keep up with the action.

That said, individual elements are very well executed. The overture was a particular highlight, blasted through speakers and accompanied by Adam Haigh’s spectacular choreography and a full cast of vibrant, thrilling performers. The whole cast are to be commended for maintaining this energy and vitality throughout the show’s 90-minute duration, a commitment demanded by the intimate Union Theatre. Alexander Barria as the voyeuristic narrator, Goya, and Jodie Beth Meyer as Carmen’s friend Manuela also stand out with clear, rich voices and powerful stage presences. The action is complemented by beautiful, atmospheric lighting and set designed by Justin Williams, Jonny Rust, and Ben Jacobs, and the remarkably authentic costume designs of Penn O’Gara.

Carmen 1808 is not for those in search of the ‘Original’, nor does it claim to be. This show suits an audience interested in a fresh, exciting evening, which experiments with new ways of adapting the classics and fiddles with the boundaries between opera and musical theatre.