Review of: AI Love You

Intensely thought-provoking piece about the ethics of a future that might not be that far away.

Exploring the relationship between Adam (Peter Dewhurst) and April (Eve Ponsonby), Heart to Heart Theatre’s AI Love You is the story of a human and their artificial intelligence companion, purposefully designed to be a ‘perfect match’. The pair are the first trial run of the programme, but April has a degenerative bug in her system – over time she will fail to function completely, and is so petitioning to have her system shut down so Adam does not have to watch her waste away. Harsh invasive white light floods the stage for the interview procedure, led by a voice coming over the loudspeaker and punctuated by a reprimanding buzzer should the conversation stray where it is not allowed. 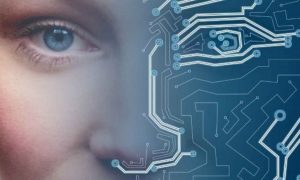 As the audience file in, Dewhurst and Ponsonby sit anxiously on two rather uncomfortable looking metal stools, glancing nervously at us – little do we know we will ultimately be deciding their fate. Each audience member is given a white voting card upon entering and is called to vote a number of times throughout the show, joining the debate. We have a chance to question each character individually on their side of the argument, both showing impressive improvisation skills given the complexity of the audience questions. Dewhurst in particular keeps the audience rapturous, getting chuckles on more than one occasion despite the desperation with which he portrays his moment.

Then in the play’s riskiest move both actors freeze on stage; April malfunctions and we’re left seemingly unattended, instructed over the loudspeaker to discuss as a group whilst she’s recharged. This rather bold move pays off in my particular show as we quickly settle into a debate about the pros and cons of giving robots autonomy, and whether or not this is a question of yet another man trying to control a woman’s choices – a discussion very much on everyone’s lips in the wake of the Weinstein scandal, #MeToo movement and the 100th anniversary of women gaining the right to vote. I wonder how the discussion would have differed had I seen AI Love You on a different night; and as if this show didn’t already have enough opportunities to develop into something new, Dewhurst and Ponsonby switch roles every performance, taking it in turns to portray AI and human (talk about keeping actors on their toes!).

The show is peppered with memories which I’d have loved to have seen more of; the lights changing from the harsh, clinical white of the interview room to soft pink and warm yellow, looking back on Adam and April’s relationship through (almost literally) rose-coloured spectacles. These snapshots of the past give relief and provide a stark contrast from the heart-broken, warring couple we see fighting for the majority of the show. Melanie Anne Ball could have allowed for a few more of these moments in her script, as the majority of the show really is a rather bleak affair – whilst watching there’s a sinking feeling similar to Black Mirror episodes, becoming painfully aware that no outcome is really able to be a positive one.

AI Love You also gives a new context for the often rehashed “Switzerland Debate”, asking whether euthanasia should be extended to robotic consciousnesses, and questioning how this differs from humans. This is an incredibly thought-provoking piece, the numerous votes keeping you on your toes throughout the show – after the play had ended I was even drawn into a debate about my voting choices with a complete stranger. With artificial intelligence creeping ever closer in a world where self driving cars and virtual reality video games are becoming part of the norm, are the ethical debates which AI Love You poses really out of the realms of possibility?