Review of: The War Has Not Yet Started

A strange look at a world in a time where connections are not all they seem.

Theatre Royal Plymouth brings the second of two works, The War Has Not Yet Started, to the Southwarl Playhouse’s current season – written by the successful Russian playwright, Mikhail Durnenkov, translated by Noah Birksted-Breen. The evening is a selection of monologues, scenes or sketches, all connected not so much by character but by themes and allusions. 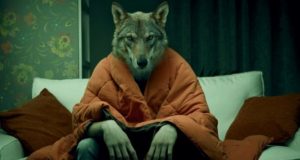 In the opening scene three flatmates sit absorbed on screens and on headphones, suggesting an increasing dependency on the virtual world at the expense of real personal communication. This breeds suspicion as they become more and more bound up in their own world of gaming, music or online shopping, setting up a reality where boundaries blur and human connections start drifting further and further away.

Durnenkov employs his wayward humour to a range of imaginings, where the truth is hard to locate and fakery abounds – in the news, in relationships, in business and in politics. Characters continually promote, proselytize and puncture both ideas and behaviours, seemingly unsure what to believe. Genders are fluid and derail as they are presented with a certain lack of conviction, cheating us of any sense of the expected. Scenes and monologues blend from one to another, linked with a variety of music motif – from George Formby to classical to indie pop, meaning little, signifying nothing. Birksted-Breen’s translation explores this murky world through metaphor and oxymoron, – peace fighters are cannibalized and armies lack strategy, girls are boys, dads can be mums and one day your prince will come if you bother to know your neighbours.

Performances are assured and emanate a truth and naturalism in their delivery, but characters are stated rather then explored or revealed, creating (at times) a disconnect between actors – often the scenes also feel as if they are there to carry an idea rather than convey any real emotion or meaning. The play has an eccentric humour about it in places, along with a wacky light take on the world at times but, strangely, the set seems cumbersome; too solid, obstructive and draining to the piece. Gordon Anderson’s direction, while solid, can err towards the pedestrian at times and does not always bring the absurdity of the play to life. The War Has Not Yet Started plays without an interval as it ranges through a selection of life’s possible scenarios, some of which resonate while others leave you bothered and even bewildered. However, there is no escaping this reality – a fitting notion for Durnenkov’s work, I guess.