Sacekripa’s VU serves beauty and simplicity in a sombre acrobatic cup of tea.

A morose man enters his home and turns on the kettle. He sits at a small low table on a tiny wooden chair and takes off his tie. Aside from the size of the furniture, it is a familiar ritual; unwinding after the working day. Yet VU‘s tea-making routine has many more eccentric flourishes. There are jumping sugar cubes, tea bag darts and long paper finger extensions. 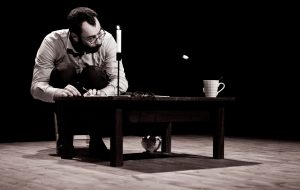 Sacekripa’s VU (seen in French) is a creative display of table sized acrobatics. Performed and created by circus trained juggler Etienne Manceau, every stunt is set up and executed with precision. Each object is placed exactly where it needs to be, giving insight into the man’s obsessiveness and logic. Although he seems a little strange, we appreciate the beauty and ingenuity of his masterful manipulation of simple everyday objects.

While the manoeuvres are impressive, the man remains unmoved. He is similarly unimpressed with the audience, some of whom he entices to assist him. VU prompts us to consider what makes us satisfied in mundanity. The man’s ingenuity appears to be a search for something to amuse, shock or take pride in. Unsatisfied, the end takes a dark twist as, while holding a cleaver, the man follows the impulsive thoughts of ‘what if?’. In this nail-biting climax, the audience gasp as Manceau expertly plays with the tension and fear. We sense a risk no smaller than those in larger scale circus.

Although I did not see it, Sacekripa previously brought MARÉE BASSE to the mime festival last year. Hopefully they can continue to surprise us with their originality in the following years.