Review of: Twilight: Los Angeles, 1992 at the Gate Theatre

A gripping retelling of the 1992 Los Angeles riots

On March 3 1991, LA taxi driver Rodney King was beaten by four LAPD officers after a high-speed police chase. The whole incident was caught on camera, and the resultant trial was subject to intense media scrutiny. When the four officers were acquitted the next year, the titular riots erupted across the city, with 63 people killed and more than 2000 injured. They only ended when the national guard were called in.

The themes of the phenomenon were distilled by Anna Deavere-Smith’s one-woman show, based around eye-witness accounts of those orbiting and within the riots, which debuted in 1993 before going on to be nominated for two Tony Awards the following year. 25 years later, it is again revived at west London’s Gate Theatre, with Nina Bowers assuming the role Deavere Smith herself played back in the ’90s.

It’s sad but important to note how the piece has lost little of its pertinence, trading, in fact, the proximity and reactivity of the ’90s production for a more mournful tone of the late ’10s. If the story of Rodney King is still being told, then not enough is being done to learn from it. Bowers bounds between characters, ethnicities and locations in the hour-long piece, portraying injured lorry drivers, African-American lobbyists and expectant mothers as they are caught up in the anarchy of the riots. It’s a maelstrom of a script, packed with vantage points, opinions and anecdotes, each as multifaceted as the last. 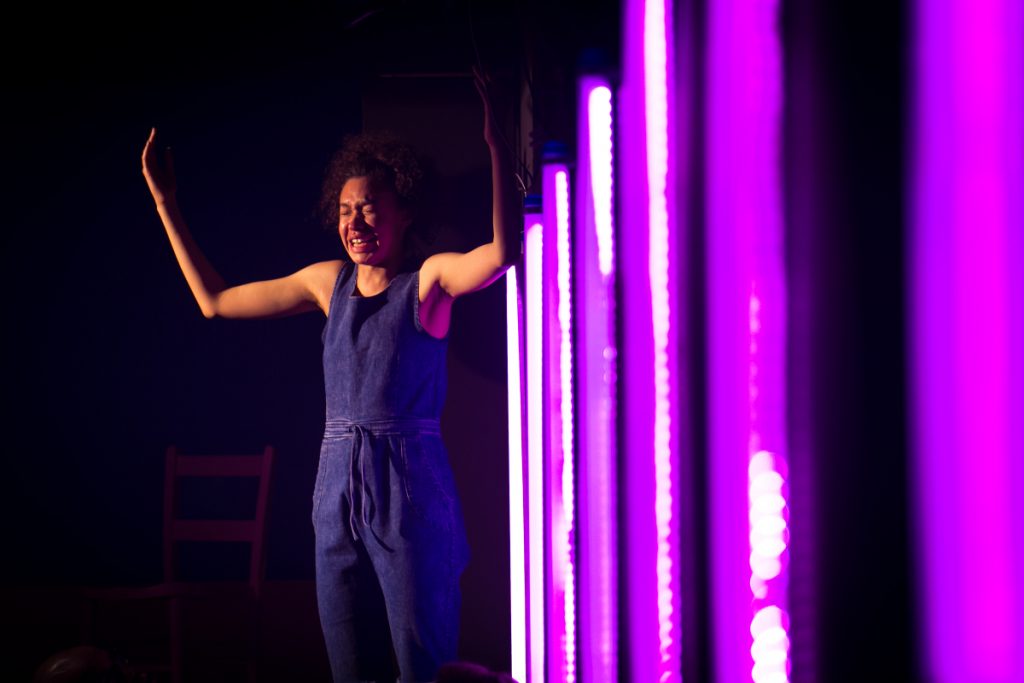 At the start of the show, Bowers asks the audience whether or not rioting is a legitimate form of political protest – about a third of the room put their hands up. The following hour of performance proved why the question was divisive. Protest can empower, it can provide a voice, but we should never forget the victims.

Though Ola Ince’s production is perhaps not as incisive as it could have been, the piece provides conflicting opinions, rewrites of the same histories, and serves a running commentary on how justice for one ethnic group is rarely justice for another. Sometimes, systemic racism can only be at its most explicit in retrospect. Bowers’ portrayal of Korean shop owners, caught in the crossfire and often seeing their businesses looted during the riots, is a telling reflection of how this issue is rarely a dichotomy. ‘Us versus them’ is far too frequently seen as a binary experience.

Bowers’ performance is frenetic and sparse – she characterises each different figure with a single gesture; a curled lip, a clutching of the stomach, or a manspread across a chair. It is economic storytelling at its most refined, augmented by Anna Watson’s kaleidoscopic lighting design that covers every dimension of the black box space.

Halfway through the show, Bowers announces that there will be a ten-minute break to drink coffee and chat amongst ourselves. A timer counts down on the wall. A pseudo-interval, the moment is a surreal one – while it gives audiences a breather, we still inhabit the stage space and the histories contained within. A neat touch; and a perfect way to maintain the show’s rhythm.