Tiny Dynamite premiered way back in 2001 (remember 2001?), a co-production between physical theatre company Frantic Assembly and new writing pioneers Paines Plough. When it was later revived in the Lyric studio in Hammersmith (remember the Lyric studio?) under the masterful direction of Vicky Featherstone, it was described by Lyn Gardner as ‘a difficult horse’, hard to rein in and needing a delicate touch to mount.

It’s easy to see why – Morgan builds a complex series of interwoven themes within the piece, the story of two childhood friends, Anthony and Lucien, who escape to the coast for a seaside summer retreat away from the murky squalor of city life. From there the pair meets food deliverer Madeleine (Tanya Fear), with whom they strike up a pithy, summer-season friendship. Simultaneously to this, both Anthony and Lucien allow a deep-seated secret to fester between them, providing much of the intrigue for the piece’s eventual progression. Furthermore, Morgan adds a further dialogue about causation, randomness and the nature of accidents – whether or not things can be predicted, or if miracles can ever really occur. A lot of plates spinning simultaneously, as one can imagine.

To go a step further, one change director David Loumgair notes is the decision (with Morgan’s blessing) to identify Lucien not as a man, but as a woman, with Eva-Jane Willis as a shy, neatly ordered friend to the erratically fraught Anthony (Niall Bishop). Swapping the fraternal banter in favour of a more earnest, wrought relationship between childhood friends teases out their differences, introducing angles and a distinct physical relationship that seemed both familiar and antagonistic.

Loumgair’s direction, replete with low key physical sequences, certainly honours the show’s Frantic Assembly heritage, adding a stylisation and low key ethereality to proceedings. It works – for the most part, though as the show progresses and the pace is meant to quicken, these silent interjections did slow down the experience. Sometimes you just wanted Morgan’s text to speak for itself. A somewhat unexpected interval also seemed to upend the production, with the bulk of the runtime and drama to the second act after a gradually unfolding first, meaning the conclusion feels a tad rushed compared with the overall pacing. 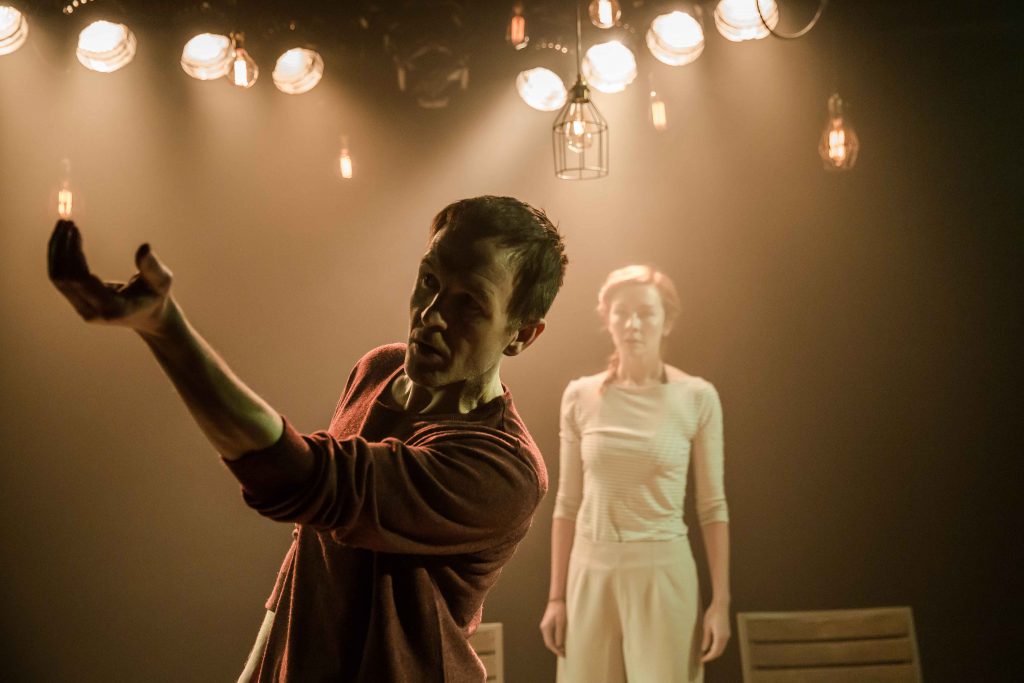 Photo Credit: The Other Richard

The fourth member of the cast comes in the form of Dan Jeffries’ music and sound design, a nonstop, trickling score that flows through the show, slowly shuffling along during Morgan’s longer monologues, unafraid to embellish the romantic relationship evolving between Lucien and Madeleine. It was its own work of art.

On the performance side of things, it’s Willis’ Lucien that does the vast majority of the heavy lifting, while Bishop plays the ‘loose-cannon’ role with all the tropes modern theatre has seemingly given to those with a form of mental illness – namely, forehead bashing, random outbursts and fits of violence. While perhaps more delicate than some, it still felt somewhat dated.

Tiny Dynamite unfurls under a nicely configured lighting design from Zoe Spurr; all naked light bulbs, long, flickering filaments and blue washes – creating the aesthetically pleasing teal and orange that appears in most modern films. Alongside the freshly timbered set by Anna Reid, surrounded by a small moat of water, it all feels a bit like a getaway resort sponsored by a central London Hollister. Looking back, it also seems to owe a lot Julian Crouch’s original 2001 design – especially the coffin-sized hole at the back of the stage where actors can submerge themselves in water. Death is always on the stage.

Loumgair is slow and purposeful with his direction, meticulously taking Morgan’s lines apart and eking out their significance. If Morgan’s script is, as Gardner puts it, a difficult horse, then here it is slowly trotted across the field. It is all somewhat serviceable, but with this approach, the dialogue loses a lot of its charge, and spontaneous friendship between Anthony and Lucien feels almost too measured to be engaging. A perfectly satisfying adaptation, but not as explosive as it could have been.