The award-winning theatre company Kandinsky return to the New Diorama with a re-run of their 2016 hot-shot piece Still Ill, dealing with the complications and struggles of a FND supporter (that’s functional neurological disorder, for those who’s medical jargon is a little rusty). Sophie is an actress, just landed her first big job, when her hand suddenly paralyses into a claw – unable to move, grasp and, more worringly, starting to spread to other areas of her body. The crux of the story comes with the much-argued realisation that, actually, there is nothing wrong with Sophie’s brain. It is all working wonderfully – apart from the fact that Sophie’s legs are paralysed, she can’t move her hand and has a seizure around once a day. 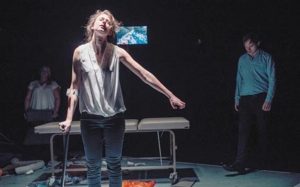 It is this interplay between fact and fiction that marks the basis of Still Ill. If something is perceived in the mind, but not shown as a problem with the physical body, can it consequently be called ‘real’? Kandinsky’s decision to explore this using different storytelling techniques that blur this boundary is what can only be called genius – Sophie’s life as an actor and the use of filming terminology in her moments on set come full circle when the same storytelling techniques are used to show her ‘real’ build-up of seizures around halfway through the piece. Reality is also questioned in the simplistic design – screens show pre-recorded footage of household tasks, like chopping cauliflower; on the set of Sophie’s TV series we flit between ‘reality’ onstage and reality as seen filtered through the camera lens. This gorgeously compares to Sophie’s experience of FND herself, which is at the same border between reality and fiction that theatre itself arguably exists. The audience accepts unquestioningly that a stuffed blue glove, clenched as a fist, is Sophie’s unresponsive hand, even when she puts it on a table and steps away from it. Where does the line between fiction and real life exist?

This automatically also sheds a light on the stigmatisation of mental illness. Sophie herself (gorgeously played by Sophie Steer) balks at the categorization of her problem as ‘psychological’, insisting that there is something physically wrong. In her eyes, a psychological condition is not serious enough, seeing it as her mind betraying her from inside her own body – a piercing insight into how mental health conditions are not taken as seriously as conditions which have a physical origin. This is seen most clearly in Mark’s changing relationship to his sister’s illness (wonderfully portrayed by Hamish McDougall), accompanied by an anxiety-inducing live soundscape by Zac Gvirtzman and various specialists, nurses and fringe characters, all given wonderfully three-dimensional portrayals by Harriet Webb.

However, the pace and structure of the piece starts trembling slightly after Still Ill hits the hour mark. At this point, with the plot plateauing, Kandinsky start discussing and developing – useful and interesting comments, but with nothing really happening restlessness starts kicking in. This could have been avoided by shaving off minutes from earlier in the piece; each storytelling section lasts around 2-3 minutes too long, meaning that the last third of the piece loses a fraction of the tension built up over the first two thirds. This is, however, a minor point to make, and the vast majority of the piece stays utterly relevant and bitingly imaginative.