A new all-female musical is exciting, but needs major refinement

More Details
On paper, Oranges and Elephants has all the ingredients for a marvellous addition to the new musical roster – an all-female cast of actor-musicians, a marvellously apt venue at Hoxton Hall, and a gangland war setting akin to Peaky Blinders.  It feels like a perfect win, but, as is so often the case, just because a play works well on paper doesn’t mean it comes together in pr]actice.
A lot of this is down to the fact that the show’s plot drags, especially in the second act. We begin with two gangs, the Oranges and the Elephants, brawling over their West End turf and who owns what. From there it escalates with the arrival of naif Mary, and the maiming of one of the gang members in a group tussle. Schemes and principles collide in messy, meaty, cavalcade of plots and set pieces.
The all-female cast conjures up the pandemonium and anarchy of the whirling gang violence well – especially Rebecca Bainbridge’s Ada, whose hulking and sadistic menace makes her the perfect antagonist. Christina Tedders’ Nellie, who dreams of running away and escaping the violence of the streets, also has a startling and haunting voice that is used well in the second act. The night’s emcee Susannah van den Berg tickles as our omniscient narrator, providing levity and a fourth-wall-breaking pizzazz, perfectly in keeping with the music hall setting of the Hoxton venue. 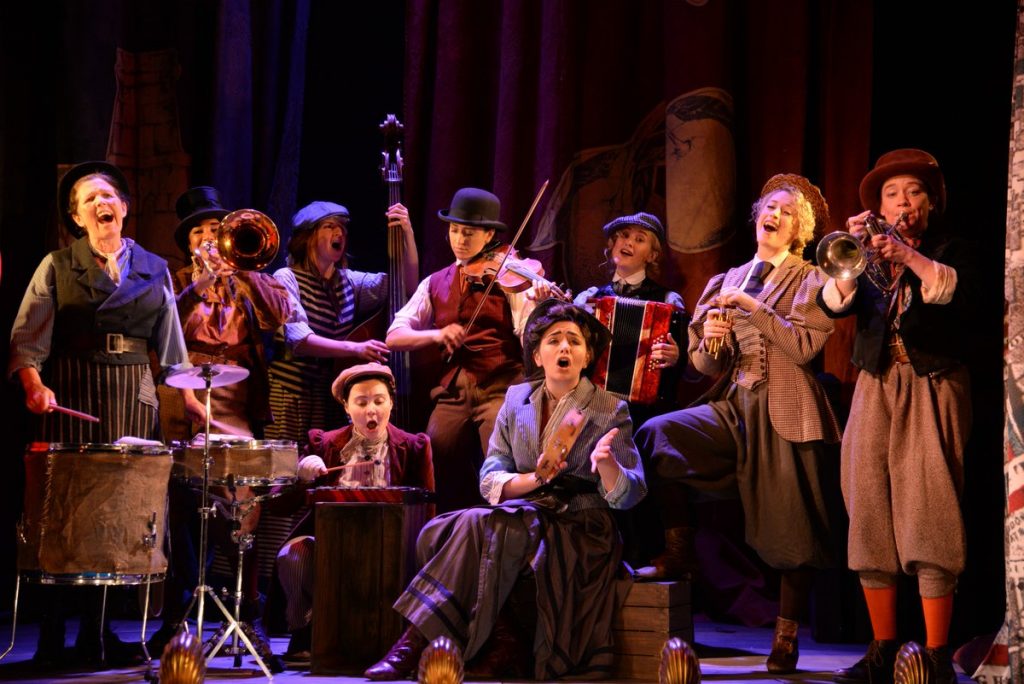 And it is a splendid venue at that – the recently restored wooden beams and leather-clad benches of the auditorium conjuring up a splendidly authentic experience for the production.
But beyond this, the show feels largely strung together, with character motivations and circumstances accelerated through rather than properly explored. The clarity is lost amid all the largely unmemorable show tunes, laboured with four sing-a-long sections that always feel laboured. Even a central confrontation between the two gang leaders, towards the end of the show, is an anticlimactic experience that never creates a memorable conclusion for two engaging characters. A strange double crossing also feels hastily set up. The production’s tension dissipates somewhere in the back streets of Victorian London; this is a text in need of a systematic redraft and rejigging.
There’s the seed of something intensely provocative and exciting in Oranges and Elephants, and the rage of a group of women constantly ostracised and limited by their social circumstances is keenly felt. A rousing final number is a testament to what this show could have been if it had played to its strengths. But as it stands, it all just feels a bit too rushed and unfinished, a step towards a complete whole rather than a finalised product.