Review of: Lobster at Theatre503

It’s a London housewarming party. J is introduced to K. ‘You’re perfect for each other’, a mutual friend says. They’re suddenly face to face. They stare.  It looks like they’re about to click, and something is about to blossom – except, this isn’t a principal encounter, or a “Dance At The Gym”-style love-at-first-sight moment.  Lobster isn’t a play about a relationship beginning, but instead, quite the opposite.

Looking back over a long-term relationship is a strange experience, rose-tinted lenses distorting events, emotions, with two accounts emerging from the two different parties. In Lucy Foster’s script, J and K’s memories of their time together are disputed like lines on a battlefield, old words used as weapons while tired arguments turn into fresh wounds. It’s a caustic trip down memory lane between two very different people – J the idealist, the religious family woman, while K the pragmatist, determined to understand herself before she attempts to impose that on anyone else. They’re cut from different cloths, opposites – but don’t they always say opposites attract? 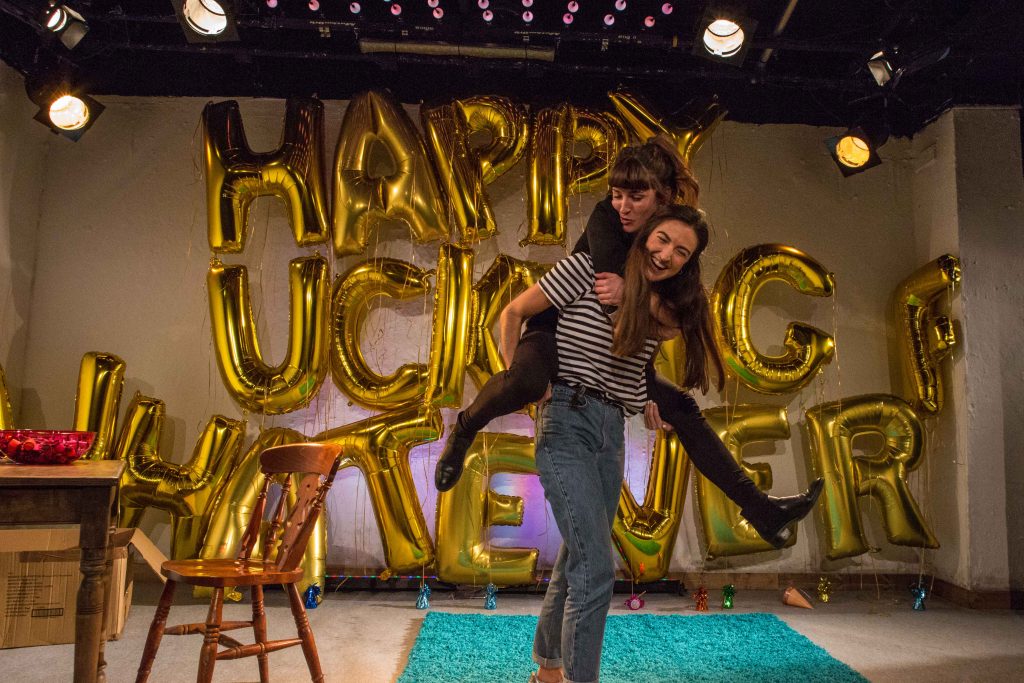 The ideas at work in Foster’s two-hander are recognisable, sometimes painfully relatable, and the piece grounds itself in a form of relationships many in the audience will comprehend. We’ve all been to the awkward salsa classes or stormed off in a supermarket. For the most part, it ticks over nicely and organically, save some strange expositional moments that blindside us as audience members – throwaway mentions about rounds of IVF and financial uncertainty that don’t seem to fit. One almost wishes that Foster gives us every piece of information early on, letting all the pieces hustle and bustle over the next 90 minutes.

Director Kayla Feldman guides her two performers across the production with enough rhythm and motion to hop between past, present and future, as Foster blends hopes for the future with counterfactual discussions of ‘what could have been’. Jamie Simmons’ expletive-proclaiming balloons also make for a wonderful touch. Louise Bereford and Alexandra Reynolds bounce off each other with the perfect amount of familiarity as the star-crossed couple, familiar and intimate, as accustomed to squabbling as to spooning. An underwater and quietly nautical sequence was charmingly low-key, perfectly capturing the suppressed excitement of mutually a discovering a new romance.

But sometimes Ying doesn’t always end up with Yang. Chalk and cheese don’t always work. People aren’t like hardware – you can’t just work out how to make them compatible. Foster has deftly crafted a painfully real exploration of a modern same-sex relationship, a subject matter tackled all too rarely on British stages at the moment.