This critically acclaimed, award-winning production transferred into the West End in December last year, following a hugely successful premiere at Bristol Old Vic, and has become an instant hit across the board – with a wealth of critics, bloggers and audiences raving about The Grinning Man’s new London incarnation. The show receives huge praise and standing ovations at every single performance, with news of the riotous audience reaction spreading sensationally via word of mouth. 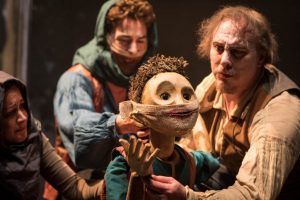 As with the Bristol run, the critics have heaped praise on the show too, with a wealth of glowing reviews for the London production. The Times said “the cast are outstanding”, adding that “it’s a triumph”.  The Observer hailed the production as “miraculous” and the Daily Telegraph raved about the “spectacular puppetry”. The Sunday Express called it “brilliant production” and praised the “awe-inspiring” puppetry. What’s On Stage sums it up: “It is a remarkable, entrancing achievement and a treat for anyone who likes their storytelling with plenty of dark magic thrown in.”

As well as critics and the general public, celebrities and creative minds have also heaped praise on the show. Harry Enfield proclaimed “the whole thing is amazing”, while Hannah Waddingham was “overwhelmed” by the production and Mel Giedroyc applauded the “beautiful score” which is “clever and haunting”, declaring ‘’I want to see it again”. Simon Callow exclaimed the show is “spectacular, theatrical and exciting!”

Based on the classic Victor Hugo (Les Misérables) novel The Man Who Laughs, this romantic gothic musical love story set in a fantastical world with a dark heart, is brought to life by Kneehigh writer Carl Grose (Dead Dog in a Suitcase) and “powered by an outstanding score” (Sunday Times) by Tim Phillips and Marc Teitler. The Grinning Man reunites Tom Morris with two puppeteers who began their careers inside Joey and Topthorn in the original production of War Horse – Finn Caldwell and Toby Olié – now leading their own puppetry company Gyre & Gimble.

The Grinning Man joins several other recent Bristol Old Vic hit shows transferring to the London stage, including Swallows & Amazons at the Vaudeville, Peter Pan and Jane Eyre at the National Theatre and Long Day’s Journey Into Night starring Jeremy Irons and Lesley Manville at the Wyndham’s.