Bananaman the superhero was a staple of my childhood – whenever my siblings and I went to visit the grandmother all those years ago she used to bring out a crumpled stack of Beano’s from under the sofa, dust them off and let us tear each other to bits over who would get the newest one (gladiator-style). Leon Parris’s modernising musical captures a lot of the essence of these tales; the stupidity, the joy and the childish fun of comics. It is only a shame that the production itself is what one could only described as a glorious, wonderfully ebullient shambles. 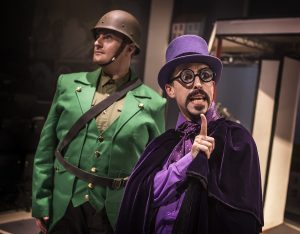 The plot itself is nothing new – Eric Wimp gets struck by a magic comet, transforming him into Bananaman; lowering his IQ in a drastic way but upping the muscular power as compensation. So far, so predictable, but the piece tries hard to combat generic comic roles in casting the usually useless heroine as a proactive, increasingly frustrated wannabe-school-journalist, played with fiery determination by Emma Ralston. Mark Newnham is also wonderful as Eric Wimp, but the star of the show is undoubtably Marc Pickering, shining as the slimy, purple-clad Dr Gloom. Faced with lyrics spat out at machine-gun frequency, he keeps clarity while still injecting every word with a oozing drawl that fits the ridiculousness of the show perfectly.

The plot itself is a winding, twining beast of a story that drags the audience along by the hair at least a dozen time during the piece. We switch from bank to haunted house to Eric’s room to street to the villain’s kitchen with such velocity that the locations themselves are often not given enough time to settle, leaving the audience slightly uncertain as to what is exactly happening and to whom. Leon Parris’s lyrics help in this regard, sprucing up what is a quietly unimaginative score, with a few good tunes that you’ll be humming down the street afterwards but will probably fade away by the next morning.

Despite a stellar cast, Bananaman felt it needed at least another couple of days in the rehearsal room. Fight sequences were sloppy, plot archs were vague and some of the most exciting moments dealing with walls with spikes and fighting piranhas – never happened. There are only so many times you can watch Eric Wimp run offstage, Bananaman run onstage and not wish the team had tried a few more creative ways to show the change. The set was fun and beautiful but didn’t gel with the direction, the choreo was aesthetically gorgeous but tended to obscure the plot rather than advance it – the entire thing, while fun and with lashings of energy, felt like it had crashed together at high speed and left the audience picking bits off the floor, trying to piece it all back together. The joy and the entertainment shines through despite this, but the sloppiness of certain scenes mars the overall quality of the play, leaving one wondering wistfully how good it might had been had the edges been properly sharpened up.