Dramatic and anarchic return of Schaffer's beast of a play about the rivalry between court composer Salieri and child prodigy Amadeus Mozart.

Shaffer’s documentation of the fraught relationship between child prodigy Wolfgang Amadeus Mozart and rival composer Antonio Salieri returns to the National after a sell-out run in 2016/17 – and what a wonderfully gorgeous beast it is. Michael Longhurst’s direction is a thing of beauty, twining music, musicians, actor and setpieces in a dance that follows the ups and downs of Salieri and Mozart’s relationship to perfection. The unholy clash of modern and more traditional elements characteristic of Schaffer’s play invoke a world of the past, yet link it firmly in the present – dabbing, Minnie Mouse ears and plastic masks create a world as frustrating and anarchic as our own, lifting it effortlessly out of the grand, stately Vienna many associate with the word ‘classical’. 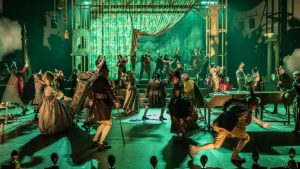 Lucien Msamati is an utterly electrifying Salieri. The part might pull towards the overly grand, with lines that could err towards the repeatedly (and therefore diminishingly) monumental – but Msamati keeps the character away from the pantomime with refreshing straightforwardness. In contrast, Aiden Gillen’s delightfully brattish Mozart fidgets and prances his way around the stage with a glee that is wondrous to watch, and makes Salieri’s loathing easy to understand. The two characters so utterly bereft of most sympathies that, towards the end, they seem to compete with each other in who can be the most loathsome. Amadeus doesn’t elevate its geniuses, instead questioning the interaction between the beauty of arts and the foulness of people that produce it – ferociously relevant in a world where so many of our own erstwhile artistic heroes are being toppled from their pedestals due to obscene personal activities.

Caught between two such extremes of personalities – the plotting teacher and the spoilt child – it is Adelle Leonce and her glorious version of Constanze Weber (later Mozart) who balances out the entire production. Leonce is almost luminescent in the role; lower in society than both Mozart and Salieri, living with and loving a quivering baby of a man, forced to deal with Salieri’s more lascivious advances for the good of her husband – and the only character who is ever truly sympathetic in our eyes.

However, the Olivier stage was not built for small dramas, and it is the living, breathing orchestra that utterly transforms the piece; music made flesh. Not only does the sheer mass of people beautifully evoke the crowds and bustle of Vienna, but in making the battleground of the play, ‘music’, take shape and form onstage, Longhurst centres and focusses the melodies until they almost take on a separate character of their own. The players are rebellious, mischievous, threatening, surrounding and engulfing the human drama of Mozart and Salieri with the precise thing that drives the plot so constantly. So used to watching black-clad musicians merge with the music they play in concert halls, it is wonderful to see their influence on the shaping of Amadeus. A beast, yes, and at times rather unwieldy, but Schaffer’s pondrous play has been allowed to take flight in the most magical way due to the delicacy of those handling it. A triumph.