Review of: All's Well That Ends Well at the Sam Wanamaker Playhouse

Price:
From £15
Reviewed by: Alex Wood

A mournful yet tightly cohesive production from Caroline Byrne

The most striking thing you notice coming into the Sam Wanamaker for Caroline Byrne’s production of Shakespeare’s tragicomic All’s Well That Ends Well are the candles – they litter the stage, the smell of dripping wax wafting across the intimate, authentic wooden theatre. The candles are an apt metaphor. The play is a piece obsessed with death – it begins with two fathers dying and another old man close shuffling off the mortal coil. Candles burn bright, but you know they will eventually be extinguished. Even though they provide warmth, light and love, in the end this can amount to nought – save when that small nub of fire is transferred to another candle, life begins again. Death, birth, renewal, all there on a solitary stick.

It all fits snugly into Byrne’s cohesive and assured adaptation of what is a problematic plot from the Bard. Daughter of the dead court doctor Helena, inconceivably infatuated with petulant prince Bertram, follows the object of her desire across Europe, going so far as to trick him into non-consensual sex to produce a child to bind them in wedlock. It’s not easy watching for a modern audience, and the creeping unease at the moral dubiousness of the experience is hard to miss. 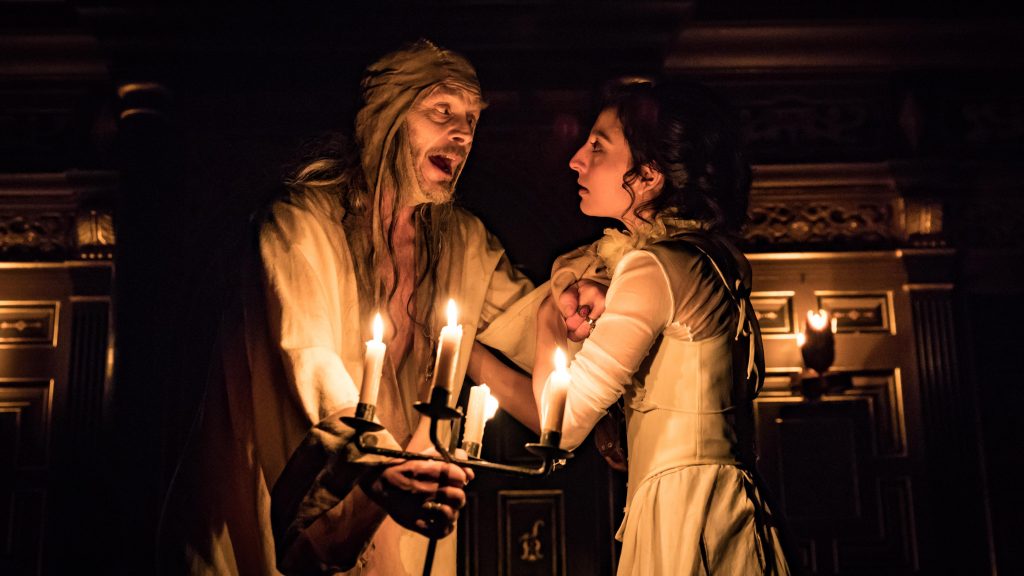 Byrne lets the show’s faults speak for themselves, focussing instead on cohesively delivering Shakespeare’s scenes in a faithful manner, though with a few anachronistic twists. The vast majority of these are given to Imogen Doel’s magnetically crafty Captain Paroles, vaping his way through scenes (not, it seems, bound to the same candle-lit constraints of the other characters) and adding in offhand remarks like ‘sweetheart’ or inexplicably boogying along to composer Theo Vidgen’s mournful score.

Though considered by many to be a comedy, Byrne never lets opportunities for bawdy humour conflict with her overall style and tone. When Ellora Torchia’s Helena is hoisted up into the roof of the playhouse, hanging like some ethereal waif, the show almost becomes some form of supernatural horror, with the jilted woman lost to the physical world and her memory hanging over those left behind. Will Merrick’s Bertram, though at first obnoxiously unlikable, becomes a frantic and tortured figure, and the catharsis of a conclusion is only hinted at, rather than fully realised. Midsummer’s Night’s Dream this ain’t.

It’s affecting, and worlds away from the Globe’s Romantics Anonymous, which occupied the same space until mere weeks ago. After her success with The Taming of the Shrew in 2016, Byrne has a knack for transforming Shakespeare’s outmoded texts into enthralling and nuanced productions. And I’m already excited for the next one.