Review of: The Woman in White

Good golly gosh, I’ve never been quite so relieved to watch a second act in my life. Lloyd Webber’s Woman in White, having a wobbly start on the world stage (lasting 19 months on the West End in 2004 and only 3 on Broadway) is re-conceptualized at the Charing Cross Theatre by Thom Sutherland of Titanic fame. And it’s a bit of a weird one. 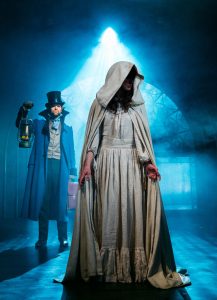 The issue with Wilkie Collin’s original book is that so much happens in it – and Lloyd Webber’s adaptation just struggles to keep up. We’re introduced to Hartwright the drawing master, introduced as the typical romantic hero, who consequently meets a ghostly woman in white, falls in love with one of his students (Laura), she falls in love with him, her sister (Marion) is also smitten (all in one song), he’s told Laura’s fiancée (Percy Glyde) is evil and held said ghostly woman in white captive, Hartwright  gets angry, runs away, Laura marries her evil husband, Percy is consequently horrible to her. Only an hour over and the audience are released for a bit of an interval breather and to process the onslaught of plot points.

The structure of this means that the (admittedly wonderful) cast don’t have the time or the space to develop scenes and present them as in any way understandable or reasonable given the circumstances. The darkly intense ‘Sir Percival Glyde’-reveal of the bad guy’s name is met with giggles behind me – it isn’t so much laced with melodrama as spurting out great gobs of the stuff. Within this overdramatic snowstorm the act takes itself far too seriously to be at all believable, and as such doesn’t quite manage to drag the audience with it.

This is such a shame as the cast are truly stellar. Carolyn Maitland as the ferociously wonderful Marion is gorgeous, with Anna O’Byrne and Sophie Reeves coping beautifully well with the comparative two-dimensionality of their characters. The one trio where all three women come together is heart-breakingly, oozingly gorgeous, a proper goosebumps moment. Chris Peluso is suitably volatile and evil as Sir Percival Glyde (the surname God’s gift to rhyming lyricists), with Greg Castiglioni bringing the house down as Count Fosco. Ashley Stillburn copes wonderfully well with a character whose main function is to fall in love with the heroine and doesn’t have a huge amount to otherwise do.

And then Act 2 appears and, gloriously, finally, the potential of the piece is revealed. The musical figures out the perfect mixture between keeping the darkly dramatic moments but also taking the piss out of the gothic tropes it so strictly adheres to – Greg Castiglioni’s You Can Get Away With Anything is an utter masterclass in character development. Rick Fisher’s lighting and Morgan Large’s now-I’m-here-now-I’m-not set intertwine beautifully, a huge improvement on awkward projections in the previous iteration. The band (led by Simon Holt) are a highlight of the evening, and finally all the muddled pieces of Act 1 fall into place. It is just a shame the musical takes an hour to find its feet.