There aren’t many shows that could feature Prince, BBD and Dirty Dancing all in one night. There’s even fewer that could do it whilst talking about Margaret Thatcher without killing the vibe, but this is the ‘80s baby, and this is drag. 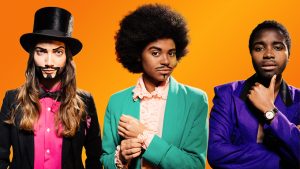 The 80’s Show by drag king collective Pecs is revived this December for a week’s run at the Soho Theatre’s intimate cabaret space, Soho Downstairs. It’s is a series of ‘80s themed songs, sketches and strip teases, compered by the aggressively attractive Cesar Jently and featuring gender defying heroes of the decade such Bowie, Prince and Freddie Mercury. Part homage and part history lesson, with a healthy amount of flirting and thrusting, Pecs demonstrate cabaret and drag at its best. It’s sensual and political, deconstructing all the rules around gender and attraction with a quick wit and a top soundtrack.

Whilst ‘80s classics performed as group numbers are the show’s raucously entertaining bread and butter, many of the solo acts are really quite special. Izzy Aman’s, Action Hero is beautifully done and John Travulva’s set is so funny it makes all the comedy in my life up to this point redundant. Cesar Jently too is brilliant, hosting as if he’s on a third date with the entire room. But the one you cannot take your eyes off is Drag King Cole. His presence is magnetic, no more so than during the utterly captivating and chilling Black Power. For five minutes the audience doesn’t move or breath as King Cole dances, mimes and lip syncs to Gil Scott-Heron and Kendrick, interspersed with real-life vox pops, playing out a bleak snapshot of the relationship between black US and British citizens, the government and the police.

To juxtapose this with sequins and strip teases could be jarring and, in a way, it is but that’s the ‘80s all over. It’s impossible to extricate the joy and freedom which the likes of Freddie Mercury, George Michael, Prince and Bowie engendered from the pain of riots, AIDS and Margaret Thatcher’s government. What’s more in 2017 as the world crashes around us, we could do a lot worse than to remember and learn from those who dared to be different. And did so before it was cool.

Drag reminds audiences that human beings are only as binary as the limits we place on them. As co-founder and drag king Temi Wilkey put it in a video for Brainchild TV, “it means that you can satirise the gender boundary, and the patriarchy, and all the things that oppress us and make us feel as though we need to be a certain way.” It’s smart and subversive but also sexy and fun. It changes your perspective whether you understand every nuance and reference or not. Pecs are achieving all of this and more and if you ever get the chance to see them you absolutely should, Freddie Mercury would have been proud.

The 80’s Show at The Soho Theatre has now sold out online although there may be some tickets available. Call 0207 4780100 for more information.