Musical comedy entertainers Nigel Munson & Tim Bond take to Hackney Attic in an explosion of  Christmas frivolity. With a cleverly concocted mixture of Christmas No 1’s, classic carols, and a revamped version of the nativity (featuring elves and blow up Santas) they succeed in making sure the laughter never stops. 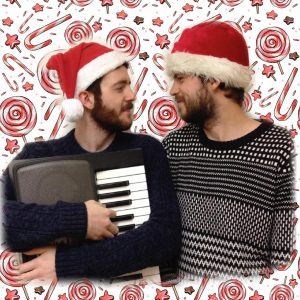 Entering the space, every surface covered in tinsel and candy canes there is a really lovely, warm, goodwill-to-all-men atnosphere (very Christmassy). Chocolate liqueurs and Haribo star mix are handed around; family and friends, and even people who have never met before actually talking in a way that can be seen as very un-British indeed.

But beneath all the celebrations is a slightly thin plot line which occasionally gets a little lost under all the tinsel. Nigel discovers a problem when his musical comedy partner, Tim, decides to give Christmas a miss this year. Tim is not in the mood for Nigel’s usual Christmas antics as he can’t get home to his family for Christmas. Nigel now has 90 minutes (plus an interval) to remind Tim of all the wonders of Christmas, why they started their festive extravaganza in the first place, and why spending the festive period with a bunch of strangers-turned-friends might not be such a bad thing after all.

With most of the comedy generated from Christmas crackers and bad celebrity impersonations, one might expect for the performance to get rather tired – however, the duo do the best they can with their source material. Both acknowlede the fact that these jokes aren’t funny in the slightest (cue lots of comedic winking and smirks) in a charming type way that gradually wins over the audience. The combination of Nigel’s festive charm, and Tim’s Eeyore like personality add to this, creating an atmosphere the audience don’t mind interacte and embarrassing themselves with. Occasionally the piece does become less of a performance/theatrical event and more of a singsong, and one wonders whether a stronger sense of plot and some more original jokes might have been able to lift the piece from ‘pretty entertaining’ to ‘wonderful’. One thing is for certain, if you are a fan of Christmas music, cracker jokes, and a stereotypically ‘Chrimbo’ atmosphere, then this is the show for you.